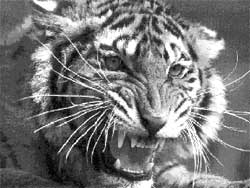 Poachers are the main threat to the survival of Cambodia's declining elephant and tiger populations, say conservationists. In fact, 100 wild elephants, tigers, leopards and rare bears have been killed by poachers in the past 19 months.

In all, 225 large mammals were killed in three of Cambodia's 24 provinces between May 2000 and October 2001, according to a new report compiled by us-based Cat Action Treasury (cat) wildlife rangers. The animals killed included 26 elephants, 20 tigers, 47 bears and over 100 wild deer and other species, the report said.

"If this rate of poaching continues, elephants and tigers will be extinct in the foreseeable future," says Hunter Weiler of cat. "At the current rate of attrition, these species may not be biologically viable in three to five years," he adds.