Can carbon-negative be the next step?

Carbon-negative technologies sequester more carbon than they release. But experts say they cannot be a substitute for reduction of greenhouse gases

Among the various strategies scientists are working on to tackle climate change, carbon-negative technologies have gained a lot of attention in the past couple of decades. As the name suggests, the technologies help reduce carbon in the atmosphere by capturing and sequestering it. But are they really effective, or even safe?

According to Pete Smith, professor at the University of Aberdeen, Scotland, negative-emission technologies have been proved only theoretically in assessment models and the technologies are controversial. Relying heavily on such technologies is risky, says Smith. He gives the example of bioenergy with carbon capture and storage (BECCS), a relatively new entrant in the field of carbon-negative technologies.

In BECCS, a large quantity of biomass (high-energy crops such as poplar, willow or temperate grasses) is burnt to produce electricity and the carbon emissions are captured and sequestered in depleted underground reservoirs or injected into porous rocks. This results in net reduction in the atmospheric carbon dioxide (see ‘Offsetting damage’). The technology can be employed in power plants or other industries that make fuel. 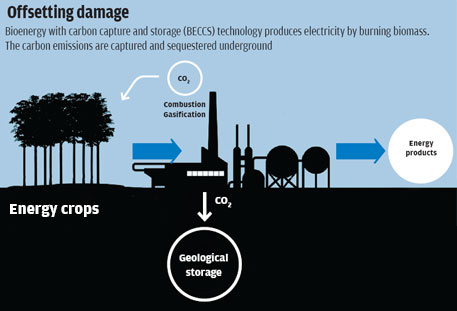 According to a study by researchers at the University of California, Berkeley (UCB), USA, use of BECCS could make power generators store more carbon than they emit. Their study, based on a computer model of the western North American electrical power grid, says a combination of BECCS, renewable energy and fossil emissions reductions can create a carbon-negative power system in western North America by 2050, with up to 145 per cent emissions reduction from 1990 levels. The study was published in Nature Climate Change on February 9.

Opinions, however, remain divided over BECCS’ practicability. “BECCS may sound ideal, but it has many commercial uncertainties,” says Daniel Sanchez, a graduate student in UCB’s Energy and Resources Group, who was part of the study. “Nevertheless, we’re taking this technology and showing that in the Western United States 35 years from now, BECCS does not merely let you reduce emissions by 80 per cent but gets the power system to negative carbon emissions.”

Doubts have also been raised about the safety of underground sequestration of carbon. According to a 2014 report by the Intergovernmental Panel on Climate Change, it can cause contamination of water aquifers or leak into the atmosphere. The report also said that injection of carbon dioxide in underground porous rocks can trigger tiny earthquakes which, in turn, can release the carbon dioxide.

Daniel Kammen, professor at UCB and director of the Renewable and Appropriate Energy Laboratory, where the research was conducted, has a different view. He says BECCS could be one of the few cost-effective carbon-negative opportunities available to mitigate the worst effects of anthropogenic climate change. This strategy will be particularly important should climate change be worse than anticipated, or emissions reductions in other portions of the economy prove particularly difficult to achieve,he says.

Apart fromBECCS, there are a few other carbon-negative technologies which are being studied. Accelerated weathering of magnesium oxide-bearing rocks is one such technology in which igneous rocks containing calcium and magnesium silicates are made to react with atmospheric carbon dioxide. This results in the production of carbonates that store carbon. The technology, however, is quite expensive, costing US $1,000 for every tonne of carbon dioxide removed, says Jen Wilcox, professor of energy resources engineering at Stanford University, USA.

Direct air capture of carbon dioxide is another example. It involves using materials such as amines, minerals and zeolites, sodium hydroxide and activated carbon to directly capture carbon dioxide from exhaust gases from industries and other sources. Biochar, a charcoal made by slowly heating vegetation in the absence of oxygen, is yet another example. Biochar stores carbon, preventing its escape into the atmosphere. It can be used as a fertiliser but is harmful to earthworms (see ‘Carbon curbs’).

Reducing GHG a must

Carbon negative technologies can be used along with measures to reduce carbon emissions.

“Plan A must be to reduce greenhouse gas emissions. A failure of BECCS or other negative-emissions technologies to deliver expected mitigation in the future leaves us with no plan B,” warns Smith. He also says that over-reliance on BECCS and other negative emissions system in the future, along with continued use of fossil fuel, may be extremely risky because our ability to stabilise the climate decreases with the increase in emissions.

His view is mirrored by the National Academy of Sciences which recently released a two-volume report on carbon reduction. “Strategies to remove carbon dioxide from the atmosphere are limited by cost and technological immaturity, but they could contribute to a broader portfolio of climate change responses with further research and development,” says the report.