'Mining plans cause growth of extremism in the Scheduled tribal areas'

V Kishore Chandra Deo, the Union Minister for Tribal Affairs and Panchayati Raj, has urged the Andhra Pradesh governor to intervene immediately to check the proposed bauxite mining in Visakhapatnam district. In a letter dated March 14, Deo appealed to E S L Narasimhan to use the governor’s special powers to cancel all the memorandums of understanding (MoUs) that the state government signed with various companies in connection with bauxite mining.

In the letter, Deo elaborates how his constituency, the entire belt of Schedule Five areas (Agency areas) in Visakhapatnam district, has become a hotbed of Maoists’ activities because of the proposed mining plans. He points out that the mining projects violate the Constitutional rights of the tribal communities living in Schedule Five areas and the state and Central laws that ensure protection of their land and livelihood. The proposed plans also violate landmark rulings of the Supreme Court, says the letter.

The minister points out that government’s mining plans have created insecurity among the tribal communities in the area, paving way for the extremists to strengthen their hold on the forest-dwelling communities. “The extremists had migrated (from Andhra Pradesh) to Chattisgarh and Odisha for various reasons. But unfortunately, during the last five years they have slowly regrouped themselves by gaining the sympathy of the local people only due to the threat of bauxite mining in Visakhapatnam district. They are utilising our side of the border for recruiting and training new cadre and for storing their ammunitions and explosives in dumps located in the heart of inaccessible dense forests,” the minister points out. 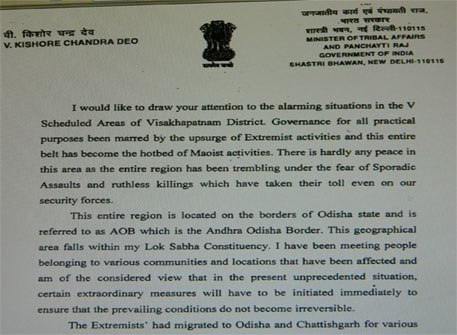 According to him, during 2005-2010, when late Y S Rajasekhara Reddy was the chief minister, the state government signed several MoUs with various companies, neither owned nor controlled by the local communities. The mining plans violate the Andhra Pradesh Scheduled Area Land Transfer Regulation Act (ALTRA), the Panchayat (Extension to Scheduled Areas) Act (PESA) and the Forest Rights Act. ALTRA prohibits transfer of tribal land to non-tribals even on lease while PESA makes gram sabha’s consent mandatory for implementing any project in Schedule Five area. Further, the mining plan also violates the spirit of the Supreme Court’s Samata Judgment of 1997, which prevents private companies from owning or leasing land for mines or industry in the Scheduled areas of the state.

The Union ministry of mines has given ten prior approvals for mining bauxite in the Agency area. Out of these, seven leases are given to Andhra Pradesh Mineral Development Corporation (APMDC), a state government undertaking, and four to National Aluminium Company Limited (NALCO), a government of India undertaking. There are 13 more applications recommended by the state government in favour of APMDC for prior approval for mining leases for bauxite in Visakhapatnam district.

“It may be noted that the APMDC is not an organisation or undertaking that either belongs to or is controlled by people belonging to Scheduled Tribes,” points out the letter. “These decisions of the then chief minister not only betray our commitment for the cause of  the people who belong to the Schedule Tribe communities but also amounts to a flagrant violation and affront to our Constitutional provisions (for protecting the tribal communities and their land),” says the letter. “The impugned orders of the late chief minister negate the very purpose for which the Forests Rights Act was enacted.”

The letter further points out that Y S Srilakshmi, former secretary to the state industries and commerce department, and P D Rajagopal, former managing director of APMDC, who signed agreements with ANRAK, a middle-east based company, for supply of ore and production of aluminium, are now behind bars for their alleged involvement in the illegal iron-ore mining by the former Karnataka minister Gali Janardhana Reddy’s Obulapuram Mining Company (OMC).

The letter, which elaborates the environmental and pollution problems that could be caused by bauxite mining and aluminium production, urges the governor to cancel “the impugned orders and MoUS which are ultra vires to the constitution”. The letter cites various sections of the Constitution and different rulings of the Supreme Court that give special powers to governors as the head of a state for taking decisions according to their discretion without seeking the aid and advice of the council of ministers to restore peace and good governance.

“Extremist activities have now reached a point which is threatening our national security. Your intervention at this stage will not only strike at the basic premises on which the Maoists have gained sympathy in our state but will also send a strong message across the borders of Andhra Pradesh to other affected states like Odisha, Chhattisgarh and Jharkhand…”

While strongly criticising the then chief minister Y S Rajasekhara Reddy for signing the MoUs ( YSR’s supporters  parted ways with Congress and formed Y S R Congress, which now opposes bauxite mining), the tribal affairs minister is totally silent about the role of the present Congress government in the state led by the chief minister N Kiran Kumar Reddy in taking the bauxite mining plans forward.

The minister is also quiet about the visits of the experts’ committee appointed by the Union Ministry of Environment and Forests (MoEF). The committee visited Visakhapatnam twice last year without even taking the tribal affairs minister, who hails from the area, into confidence. Going by the committee’s remarks during those visits, it was obvious the committee supported mining.

Andhra Pradesh holds an estimated 570 million tonnes of bauxite, which, according to the Geological Survey of India, is 21 per cent of the country’s total reserve. More than 90 per cent of this reserve is concentrated in six deposits in Visakhapatnam district on the mountain caps of the Eastern Ghats. The deposits fall in the reserved forests of the Agency area on the Andhra-Odisha border. Environmentalists have long been pressing MoEF to declare the region a biosphere reserve.

The state government has been trying to tap the resource since the mid-90s. But there had been strong opposition from the local communities. In 2000, the then chief minister N Chandrababu Naidu of the Telugu Desam Party (TDP) had attempted to amend laws governing land rights of tribal people and the Constitutional provisions for protection of Scheduled Areas, but had failed. The Congress regime under late Y S Rajasekhara Reddy, who came to power in 2004, managed to sign two MoUs. The first one with Jindal South West Holdings Limited (JSWHL) of the Jindal Steel and Power Limited (JSPL) in 2005 and the next in 2007 with ANRAK, a joint venture of the government of Ras Al Khaimah from the United Arab Emirates and Andhra Pradesh-based Penna Cements.

It has been pointed out that the MoUs were signed in a very tactical way to circumvent the laws and court rulings protecting rights of the tribal communities in the agency area.