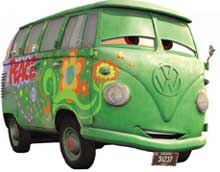 Although the world is bracing to get its hands on as much biofuel, the new animated film Cars doesn't think much of it. In an off-the-road tiny town of Radiator Springs, suffering from effects of development, when we first encounter Fillmore, a 1960 Volkswagen bus and a character in the film, is completely stoned. And Fillmore is the only one in town running on 'organic fuel'. While the rest of the characters dismiss Fillmore as the high hippy, he usually plays 1960s music in his dome-shaped tent which is tie-and-dyed and tries to sell organic fuel. The characterisation of Fillmore, inadvertently or not, casts a cloud over biofuel as well. For as much as the town or anyone else cares, Fillmore could junk it and get stoned.

The name Fill more is derived from the Fillmore concert halls, where many bands of the 1970s played.