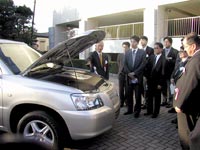 Japanese automobile manufacturer Toyota will now help Ford Motor Company of the us to build environment-friendly cars. Toyota, which recently overtook Ford to become the world's second largest automaker, is keen to promote its technology and expand its hybrid line-up.

The pact between the two carmakers allows Toyota's patents on gasoline-electric hybrid engine system control and emission purification to be licensed to Ford for its own hybrid system, which is under development. The hybrid vehicle is Ford's antidote for its low sales in the market. Stringent air pollution laws in the us, including benchmarks for global air pollution standards set by California's Air Resources Board, have prompted major vehicle manufacturers to opt for hybrid cars.

Toyota plans to supply hybrid cars to other automakers also to meet its objective of producing over 300,000 eco-friendly vehicles by the middle of the decade. Its 2004 version of the Prius hybrid vehicle will have near-zero tailpipe emissions.