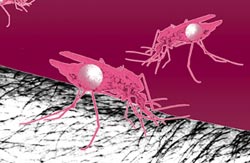 scientists have checked the bite of the mosquito. They have successfully inserted into the anopheles mosquitoes an artificial gene that renders the insects incapable of transmitting the malaria parasite. Preliminary findings of this experiment, conducted by researchers from the Ohio-based Case Western Reserve University, suggest that such genetically engineered mosquitoes can help eradicate the deadly disease. "Our experiments have proved a much-discussed principle. By spreading the gene among wild mosquitoes, we can control malaria," says Marcelo Jacobs-Lorena, the lead researcher.

A mosquito ingests the malaria parasite plasmodium when it sucks the blood of a person infected with malaria. The parasite then moves from the mosquito's gut into its saliva. The saliva containing the parasite is then transmitted to the next person the mosquito bites. This way between 300-500 million people are annually infected with malaria, of which approximately three million cases prove to be fatal. The problem has become acute over the years, with plasmodium evolving resistance to most malarial drugs. This is why the researchers came up with the novel solution of stopping plasmodium in its tracks by genetically altering the transmitting host.

To test their findings, the researchers conducted experiments on mice and anopheles. They found that following the insertion of the gene, the instances of mosquitoes having the malaria parasite in their salivary glands reduced by 80 per cent. Moreover, these insects were virtually unable to pass on the parasite to non-infected mice. "It's good news," says Andrea Crisanti, a geneticist at Imperial College in London, uk, who was the first scientist to insert a foreign gene into a mosquito. "This is direct evidence that the mosquitoes' capability to carry the disease can be altered. The feat is an interesting idea and a very fundamental scientific discovery," Crisanti asserts.

Agrees Dyann Wirth, director of us-based Harvard University's project aimed at battling the disease worldwide. "This may be a way to attack the disease without using chemicals like ddt or other insecticides," he says. Joseph Vinetz of the University of Texas, usa, opines that modifying mosquitoes genetically could be an economically effective means of malaria control in poor African and Asian countries where the disease takes the worst toll.

However, some researchers are sceptical. According to them, the gene modification is not able to completely prevent the parasite from reaching the saliva of the modified mosquitoes. "For the theory to work, the prevention has to be 100 per cent," says Fotis Kafatos, who works at the European Molecular Biology Laboratory in Heidelberg, Germany.

Other experts opine that the experiment may not be practicable as a different form of parasite than the one experimented upon causes human malaria. "So far there is no evidence that a mosquito carrying sm1 will stop the spread of malaria in humans," says Kafatos.

Experts are also worried about genetically modified mosquitoes displacing natural populations. According to them, no one knows how sm1 acts. Without understanding the mechanism, it would be risky to release such a mosquito into the environment. "I think there is a 50 per cent chance that this might disturb the environmental balance. The feat is important but it requires a cautious approach, especially in the wake of controversies surrounding genetically modified crops," says Chris Curtis, who works on malaria control at the London School of Hygiene and Tropical Medicine, the uk.