Caught in the web

A study shows how inclusion of parasites alters food webs 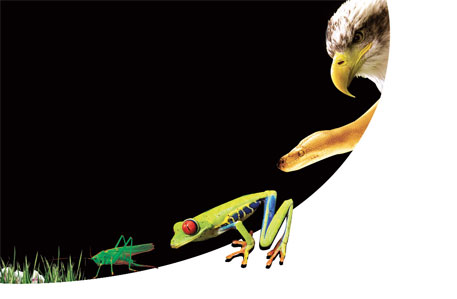 WE HAVE all heard about food chains and food webs. In school they tell us how an ecosystem is as simple as “who eats who”. Grass is eaten by grasshopper, which in turn is eaten by frogs. A frog is then consumed by a snake, which becomes food for an eagle. Grass is also eaten by large herbivores like rabbits and deer that are consumed by top carnivores like cats, lions and humans. But this simple explanation misses out on a very important component of the web: parasites. These are organisms that live on or in plant and animal hosts and depend on them for food. But it’s only in the last decade that scientists have begun to bother about how parasites fit into the average food chain.

Some studies aiming to rid parasites of this under-representation have shown that including them can alter the existing structure of food webs. An international team of scientists has now, in a first, tried to examine if these alterations are due to unique roles played by parasites or simply due to an enhanced complexity owing to an addition of more members (parasites in this case) in a food web. The study shows that including parasites alters the struc- ture of food webs but most of the changes are due to increase in diversity and complexity and not due to unique characteristics of parasites.

Apart from the generic changes, the researchers also noticed that parasites were altering the food web in two unique ways: first by inadvertently becoming food to the predators when they eat the hosts the parasites live in or on and secondly in their role as consumers. In their complex life cycles, parasites often depend on several kinds of hosts for food and sustenance. Its common to see parasites hop from one species to another unlike the free-living species who tend to feed on prey that are more similar to each other.

For their study, published in PLoS Biology on June 11, the scientists examined seven highly resolved marine food webs, including estuaries, salt marshes, tidal basins and mudflats. Three versions of each web were analysed. First included parasites but did not consider for linkages that they may have with organisms other than its host. Second, included parasites and all possible linkages, direct and indirect, that it may have with all organisms in a food web, like its linkage with predators of its host organism that inadvertently feeds on the parasite while feeding on its prey. The third and the last version of food web did not include parasites at all.

“Our findings are significant because there was conventional wisdom emerging that if you include parasites in food webs, they must alter food web structure in a way that upsets the last decade of food web theory,” says one of the authors, Jennifer Dunne, who is a professor and chair of faculty for Science at Santa Fe Institute in the US. “Our study shows that this is not accurate, instead in most cases adding parasites and their links has the same effects of food web organization as adding any types of species and links,” adds Dunne.

Maria Thaker, assistant professor at the Centre for Ecological Sciences of Indian Institute of Science, in Bengaluru, says this is the first study to very clearly test the common assertion that parasites alter food web structure.

“While the authors find that parasites change food web structure in ways that any other species would, they also find that because parasites are small, closely linked to their hosts and have complex life cycles, they strengthen certain species connections,” says Thaker. “We don’t need to throw out everything we know about food webs, we’ve just added more to our understanding of why some food chains are tighter than others. Parasites link them.”

Dunne and her team members say all of their comprehensive food web data on parasites is currently from aquatic systems and they are now looking to extend their analysis to terrestrial systems with parasites.