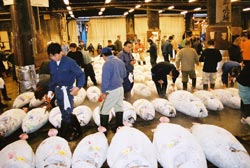 populations of many fish may lose genetic diversity even if fishing were to be stopped now, claim researchers from the University of Washington, usa.

The findings are alarming. Losing diversity of key genes would render fish populations less productive, and unable to adapt when faced with challenges like global warming, pollution or changes in predators or prey. Rare genetic variation of little importance today might be the key to adaptability in the future, assert experts.

For some animals studied by conservation biologists, such as pandas and elephants, as few as 500 individuals are enough to maintain genetic variances. However, this does not hold true for fish. For reasons not yet understood, only a small proportion of fish produce large numbers of offspring that are able to survive. Therefore, it is apprehended that as a fish population declines, the number of such capable breeders may reach levels that cannot sustain genetic diversity.

What the Washington University researchers found was that across the world, the number of capable fish breeders is several magnitudes smaller than what was estimated.

They studied a population of New Zealand snapper that was fished down to about three million. To their utter surprise, the researchers found only one in 10,000 fish was a capable breeder. This implies the genetic diversity for a population of a few million fish depends on as little as a few hundred. If such low ratios are common in most marine species, many kinds of fish may be in danger of losing genetic variability, all because of overfishing.

According to them, the findings show that it is vital for scientists to identify which fish are successful breeders, and why. Thereafter, strategies to protect these breeders must be evolved accordingly.