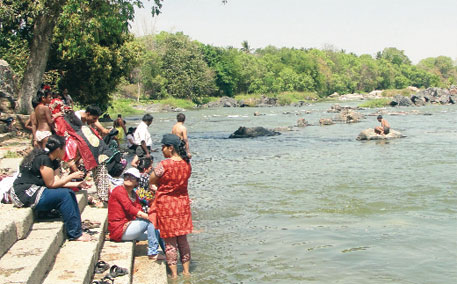 AFTER being reprimanded by the Supreme Court, the Cauvery Water Dispute Tribunal, set up to settle water disputes between four riparian states, has given its final verdict. On February 20, the tribunal asked Karnataka to release 182 thousand million cubic feet, or TMC, (1 tmc equals 28.3 billion litres) to Tamil Nadu. In addition, Tamil Nadu will get 10 TMC feet to maintain the river’s environmental flow, minimum water required for the river’s ecosystem.

The tribunal’s notification, which was issued as per the apex court direction, will come into effect when the Cauvery Management Board is formed within 90 days. Unhappy with the order, Karnataka chief minister Jagadish Shettar has written to Prime Minister Manmohan Singh asking him not to form the Board before the Supreme Court gives its rulings on all the cases related to the Cauvery’s water. Shettar has stated in the letter that when the order comes into effect, Karnataka will be able to provide drinking water from the Cauvery to only one-third of the people of Bengaluru.

Eighty-seven per cent of the water Bengaluru uses for drinking comes from the Cauvery, states a study on drinking water supply by S Puttaswamaiah, scientist at Gujarat Institute of Development Research. The electronic city’s dependence on the river is growing as many water supply schemes have been created depending on the Cauvery’s water. Earlier, the Karnataka government had filed a petition in the apex court asking for 465 TMC ft water. It wanted 32-35 TMC ft for drinking purpose; the rest for agriculture. While hearing the case, the court had observed that drinking water should be a priority for each state. However, neither the court nor the tribunal specified allocations for irrigation and drinking purposes.

“All the Cauvery basin states—Karnataka, Tamil Nadu, Puducherry and Kerala—had presented their cases in the tribunal proceedings which took 17 long years,” says Ramaswamy R Iyer, honorary professor, Centre for Policy Research, and former secretary, Union Ministry of Water Resources. The tribunal gave its final award after considering all the aspects, he adds. Besides, each state is free to make allocations as it deems fit, he says.

“Drinking water is undoubtedly a fundamental right, but the water demand of a metropolitan city is not entirely for drinking purpose. It includes industrial, commercial and agricultural demands. It is not that Bengaluru is sitting right in the middle of the Cauvery basin and is being denied water,” says Iyer.

Groundwater level is fast depleting in Bengaluru with the disappearance of water bodies owing to urbanisation, says Mohammed Najeeb, regional director of the Central Ground Water Board. Earlier, water was available 45 metres to 60 metres below the ground. Now, one has to dig as deep as 300 metres. For every 100 litres of rainwater that gets recharged as groundwater, 136 litres is being pumped out by the people of Bengaluru using water pumps, he says. Karnataka faced the worst rainfall in 42 years last monsoon season recording 43 per cent deficit, a report by Karnataka State Natural Disaster Monitoring Centre states.

Himanshu Thakkar, founder of South Asia Network on Dams, Rivers & People, says the tribunal does not stipulate maintenance of the river’s environmental flow during dry season. “Reservoirs with big storage capacity are mentioned in the notification to favour big hydro-power projects,” he says.

Farmers in Karnataka fear the 38 TMC ft that they use to irrigate kharif and rabi crops may get diverted to satisfy the drinking water needs of urban areas. What brings some cheer is the tribunal’s order to lift the ceiling on irrigating only 0.45 million ha with Cauvery water. They would now be able to irrigate up to 0.76 million ha. But experts say this will enhance farmers’ water demand.

There is a solution to the Cauvery water dispute, says economist S Janakarajan, architect of Cauvery Family, an initiative that has resolved the conflict between the two states to some extent through farmer-to-farmer dialogues and mutual water sharing. But neither the state government nor the Centre encourages the experiment, he says.