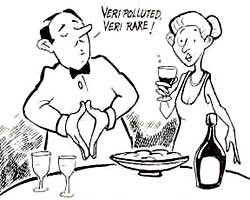 CAVIAR, the ultimate synonym for luxurious living and a major Russian export, is facing a triple threat of poaching, pollution and petroleum.

Female sturgeon swim down the Volga river to the Caspian sea with their bodies heavy with the eggs that are pickled to form caviar. But with poachers flourishing, fish farms being damaged by upstream factory pollution and oil seeping from Russia's Astrakhan shelf, fishing company executive Anatoly Okhanov says the Caspian sturgeon catch has dropped from 24,800 tonnes in 1980 to about 10,000 tonnes in 1990. He declined to give caviar statistics, but industry sources say caviar production is declining at about the same rate.