Their relationship is intricate, and it strongly bears on gene expression 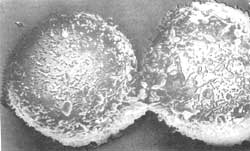 ALL life depends on the exchange of signals among cells. From important events such as conception, to sensations such as itching, everything depends on signals exchanged within your body. It has been known for long that calcium is a common intermediate in many signalling processes in living systems. When a cell is stimulated to divide, move, or differentiate into something else, the first thing it does is to change its calcium level. The change can come about in many ways. A cell can release calcium stored within interior sites, pull in calcium from blood and the surrounding tis-sue, or carry out a combination of similar activities. Calcium binds to proteins which are thereby activated (or inactivated, as the case may be).

It has been observed in many cases that the change in calcium is not a simple matter of increase or decrease. Instead, the calcium level in a cell oscillates regularly in a clock-like manner, involving violent two-to-three swings every minute. In some instances, the oscillations go on for a long time, leading to the surmise that that they are permanent. This theory is supported by a recent finding which explains that many cells and tissues have spontaneous oscillations of calcium. It is known that waves of calcium travel periodically within tissues. When one hears of these oscillations, one thinks of clocks, as with any periodic process. Do the oscillations act as timers?

They most certainly can, as revealed by the experiments conducted by Wen-Hong Li and colleagues at the University of California in San Diego, USA. Wen-Hong's work depends on a technological innovation: the development of a modified version of a molecule known as IP3, a common intermediary between a cell's signal receptors and the calcium level. Following the stimulus to the production of 1P3, which in turn binds to internal receptors and causes the release of calcium from stores or uptake from the outside. A clever way of bypassing the need for the external stimulus is to provide ip3 as required internally. This is where Wen-Hong and his team have innovated.

The modified version of IP3 synthesised by the researchers gets into the cell easily. Besides, it is 'caged', meaning that it is locked up even after it is inside the cell. It can be released at will by the experimenter. For this, ultraviolet light (UV) is needed. The energy of the UV photons releases IP3, enabling it to bind to its specific receptors and causing changes in the calcium level. The manipulation can affect both the size of a single episode of calcium increase - by varying the strength of the UV pulse, or the rate at which one increase follows the next - by varying the frequency of UV flashes (Nature, Vol 392, No 6679).

The researchers used a specific cancer cell known as basophilic leukaemia cell. First they verified that regular - but brief-trains of UV pulses led to corresponding calcium pulses. The spacing was kept at between half-a-minute to eight minutes. Thereafter, they studied one of the known consequences of calcium increases in these cells: the activation of a specific genetic transcription factor which induces gene expression. This is by no means simple. An increase in calcium stimulates an enzyme (calcineurin) to remove a phosphate group from a protein. The protein migrates into the nucleus, binds to other proteins, and then activates gene expression.

The gene expression's response is varied as all cells are not identical. Wen-Hong's team used a sophisticated method of sorting cells that responded strongly from those which did not respond, only working on the former. Release of IP3 with 16 UV pulses (spaced at an interval of one minute) caused significant levels of gene activation in about 30 per cent of the cells. A similar experiment carried out with flashes spaced at three minutes only activated about 10 per cent of the cells. The researchers followed this up. To find out the significance of spacing the flashes, they used a whole range of time-courses. A single large uv pulse was applied to elicit one huge calcium spike. Trains of uv pulses of the same amplitude, but different frequencies, gave rise to appropriately spaced calcium pulses. Alternatively, a continuous dim illumination with uv causes an increase in calcium that can be maintained at a steady level.

The finding was clear-cut and dramatic. Though the cumulative amount of calcium increase was the same between different experiments, it was clear that the strongest response was obtained when the UV flashes were spaced at an interval of one minute. A comparable level of gene expression could not be obtained from faster or slower flashes, nor from a single strong flash or a long-lasting steady illumination. This implies that besides calcium acting as a signal by itself, the frequency with which its levels change also constitutes a signal.

The working of frequency-encoding is unclear, though there is a possible solution. Very low frequencies may not work because the change is masked by the normal buffering system of the cell - the interval is so large that by the time the next one appears, the cell has forgotten the previous one. On the other hand, very high frequencies may give no time for steps further down the signalling pathway to react.

For example, if high levels of calcium activate an enzyme (which they do), the amount of enzyme remaining to be activated by subsequent pulses may continuously decrease unless sufficient time is allowed between pulses. A similar frequency-encoded system of chemical signal transfer has been previously found in the endocrine hormone system and in a particular soil amoeba. In both of these cases, the signals are passed from one cell to another. It is interesting that the same logic seems to apply in a case that involves signalling within a cell.