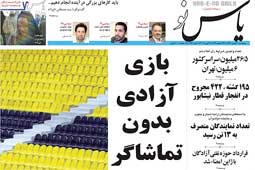 If there was a contest for the shortest publication time for a newspaper, Yas No" would be the winner. The publication hit the newsstands on May 16 for the first time in six years, relaunched by Iranian reformists hoping to use the paper to get their message out ahead of the June 12 presidential vote. Yet just a few hours later, the newspaper was ordered to halt publication by Tehran prosecutor Saeed Mortazavi.

Yas No was banned nearly six years ago after it published a letter from reformist members of parliament questioning the role of Iran's Supreme Leader Ayatollah Ali Khamenei in the mass disqualification of candidates running in the 2004 parliamentary election.

A few months ago, a judge gave approval for the paper to resume publishing. But Mortazavi filed an appeal and requested that the publication be stopped.Mortazavi is known as "the butcher of the press" for ordering closure of dozens of liberal publications in the late 1990s and early 2000s.