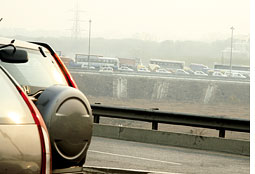 the central government has thwarted a Delhi government plan to control toxic emissions from diesel vehicles in the capital. In a letter to Delhi chief minister Sheila Dikshit, Union Ministry of Shipping, Road Transport and Highways T R Baalu said the centre would not support the state's proposal to ban diesel cars and introduce tighter emissions standards on a priority basis.

Introduction of tighter emissions norms is dependent on the availability of clean diesel (meeting Euro- iv emissions norms) and better engine technology. In their absence, the ministry could not prohibit registration of diesel-fuelled vehicles, Baalu said.

On November 26, 2007, Dikshit had requested the ministry to introduce Euro-IV emissions norms much before schedule and ban the registration of privately owned diesel passenger cars and commercial vehicles in the national capital region.

The state government had planned to introduce Euro- iv emission norms by 2010. Dikshit had earlier said that a phenomenal increase in diesel cars in the capital had negated the benefits of converting public transport to cng.

Meanwhile, the Delhi government has decided to impose environmental cess of 25 paise per litre on diesel. The government plans to use the fund for creating an 'air ambience fund', which will be used to promote clean air policies, especially for vehicular pollution in the city. However, this nominal cess, experts say, will hardly be a deterrent for people.