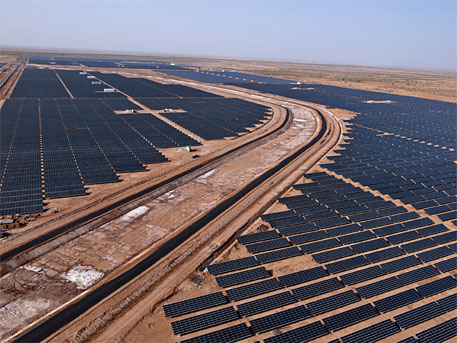 The Ministry of New and Renewable Energy (MNRE) has recently released a draft scheme for development of solar parks and ultra mega solar power projects targeting an addition of 20,000 MW of solar power installed capacity.

Earlier in August, the ministry had released a draft scheme for comments. The scheme is to set up 25 solar parks with capacity ranging between 500 and 1,000 megawatt (MW) each and amounting to 20 gigawatt (GW) of solar power capacity in a time of five years (by 2020).

The project will help states execute the Renewable Purchase Obligation (RPO) mandates and assist the Centre achieve the targets of Jawaharlal Nehru National Solar Mission (JNNSM) by 2022. The draft emphasises that increasing investment and encouraging project developers will trigger economies of scale for cost reductions and technical improvements in solar sector.

The scheme is inspired by the success of Charanka Solar Park in Gujarat. Bhadla Solar Park initiative in Rajasthan is another model on similar pattern. Recently, the government of Andhra Pradesh had also announced plans for three solar parks. P Raghunath Reddy, the state Information Technology minister, in August, had said that 200 hectares (ha) of land was set aside for a 100 MW solar farm, a 1,000 MW mega solar park in Anantapur district and another 300 MW solar park in Guntur district in the state.

Solar Energy Corporation of India (SECI), on behalf of the Central government, would be the implementation agency for all the parks and ultra mega projects. It will be responsible for the development and management of solar parks. However, the state has to identify the land for proposed solar park.

MNRE will lend some financial support for the projects. Apart from the grant of Rs 25 lakh to carry on procedures like preparation of detailed project report and surveys, MNRE would be providing Rs 20 lakh/MW or 30 per cent of the project cost (including grid connectivity cost), whichever is lower. As per the estimates, the total cost for 20 GW comes up to Rs 4,046.25 crores.

The scheme still is in draft phase and was re-released since ‘replies/comments in this regard are still awaited from state nodal agencies (SNAs).

Tobias Engelmeier and Jasmeet Khurana of Bridge to India, a private company that operates in the Indian solar market, claim that the development of ultra mega power plants and large utility scale plants is the first step towards solar power meeting the growing energy demands of India. They estimate that “these solar units, along with rooftop installations, could contribute to the tune of 10-13 per cent of total power generation by 2024.”