Rapid urbanisation and unplanned development have taken a toll on Bengaluru's lakes. Storm water drains that are meant to carry only runoff water during rains now carry the city's sewage, and many of them discharge the filthy water directly into the lakes. “The condition of the majority of the lakes in Bengaluru is poor because of discharge of sewage and encroachment. If proper action is not taken in the next five years, majority of the lakes will die,” says Ayi Vaman N Acharya, chairperson of the Karnataka State Pollution Control Board (KSPCB). The city once had about 2,000 lakes, but only 60 of them remain.

To salvage the lakes, KSPCB and the Bengaluru Water Supply and Sewerage Board initiated a project in January. The board along with the water utility has developed a decentralised system to collect the sewage from drains, treat it and then discharge the treated waste water into lakes. “It is not a permanent solution but a short-term arrangement. It will take a decade to install underground sewerage network in the entire city. We cannot wait that long,” adds Acharya. 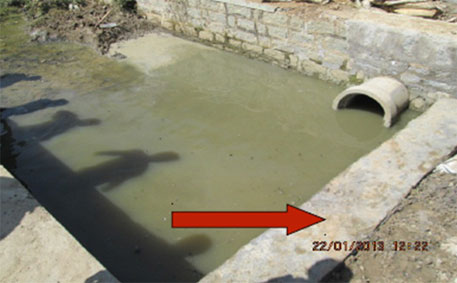 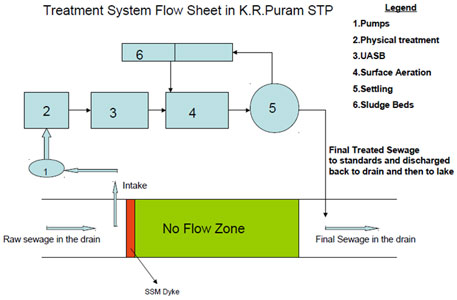 The system installed at KR Puram Sewage Treatment Plant (STP) in eastern part of the city involved constructing a medium height barrage across the Kaluve drain and collecting the sewage through a pipe by gravity in a pit. From the pit, the sewage is pumped into the STP, which treats the sewage and releases the treated water into the same drain ahead of the barrage. Thus only treated waste water reaches the Vengayyana lake.

The inlet quality of sewage is around 250 mg/l BOD and outlet concentration is just 5-6 mg/l BOD (biological oxygen demand is used to gauge organic pollution and indicates the amount of oxygen required to oxidise organic matter in water through microorganisms). The KR Puram STP has extended aeration system followed by UASB, which also takes care of nutrient removal. The upflow anaerobic blanket reactor (UASB) is a single tank in which waste water enters the chamber from below and is made to flow upwards; a suspended sludge blanket comprising microbial granules (microbe agglomerations) treats the waste water as it flows through it. 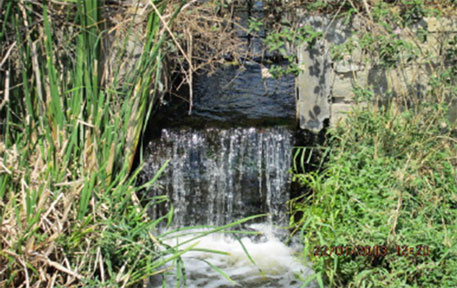 Apart from preventing pollution of the Vengayyana lake, the project has also increased the capacity utilisation of the STP. The installed capacity of KR Puram STP is 20 million litres a day (MLD), but only 5 MLD of sewage reached the plant earlier. After the barrage was installed, the total sewage that reaches KR Puram STP is 12 MLD. “The total installed capacity of STPs in Bengaluru is 721 MLD, but only 56 per cent of Bengaluru’s installed STP is utilised because of poor sewerage network. If such systems are installed in other parts of the city, then capacity utilisation of other STPs will also increase significantly”, says a senior official of KSPCB.

“The new system consumes minimal resources, can be installed in seven to eight days and the results are instant,” says Acharya. In this case, the cost incurred was only Rs 95,000.

KSPCB is now planning to ask industries and builders to take responsibility of restoration of lakes polluted by them. The board is also planning to look for ways to use water cess charged by the water utility for lake restoration. “The water cess money is not being used judiciously. My special emphasis is on saving smaller lakes with projects that are small, can be completed within six months, says Acharya.