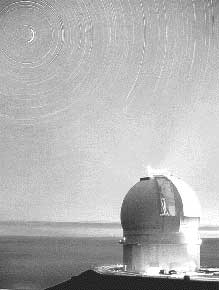 the Universe may have far less matter than previously thought, say astronomers. The findings have been separately confirmed by two groups of researchers at the Supernova Cosmology Project, Lawrence Berkeley National Laboratory, California, usa , and Mount Stromlo and Siding Spring Observatory, Australia. The discovery would help in finding whether the expansion of the Universe will continue or slow down and lead to contraction.

Astronomers are already aware that objects such as galaxies and clusters are moving away from each other. To find the expansion rate of the Universe, they measure the velocities and distances of far-off objects. Researchers observe distant galaxies and other objects such as quasars so that the recession velocities and distances could be measured. The velocity with which two objects move away from each other is called recession velocity. It is not difficult to measure the velocity because the light emitted by these objects gets redshifted if they are moving away from the Earth. The phenomenon is similar to the Doppler effect that is noticed when the pitch of a car siren decreases as it moves away from the observer.

However, it is tough to measure the distance of distant objects. Researchers need measuring rods or rulers for this purpose. According to experts, it is one of the most difficult tasks in cosmology to have such yardsticks. At present, astronomers use some standard candles such as objects having a known brightness.

Saul Perlmutter and his team at the Lawrence Berkeley National Laboratory, and Brian Schmidt and colleagues at the Mount Stromlo and Siding Spring Observatory, have been able to improve the measuring techniques of distance of far-off objects. They have used a particular kind of exploding star called the type 1 a supernova. These are considered to be white dwarf stars that have sucked in matter from a companion star because of their immense gravity and have become unstable.

The unstable nature of the stars leads them to explode in catastrophic explosions that give out enormous quantities of energy in a short burst. It makes white dwarf stars visible at great distances. As these stars contain nearly the same mass, one can use these exploding stars as standard brightness indicators.

The two groups have identified several supernovae using a very efficient technique in which a computer compares images of the same portion of the sky taken at an interval of a few weeks. If there is a new point in the image, it indicates a sudden explosion of the supernova. The relevant part of the sky is then observed to confirm the event and measure its characteristics. The researchers can correct all the errors and obtain a reliable indicator of distance with the help of these observations. Till last year, scientists thought that the Universe is flat and has the amount of matter (called the critical density) expected of such a Universe.

But now, both the groups have used the Hubble Space telescope to observe the supernovae. These measurements are much more precise and have dramatically changed the results. Both the teams have reported that the Universe may contain far less matter than earlier believed. Because less matter means less gravitational attraction, the result implies that the Universe will go on expanding indefinitely.

Although these results are still preliminary, most of the cosmologists are excited about the findings. For instance, one of the most important theories of inflationary cosmology will have to be reworked in a low density Universe. However, some cosmologists still term the findings as preliminary. They say that the data available to support the findings are insufficient.