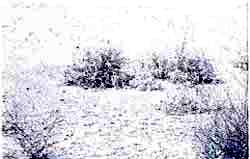 Swarms of locusts that descended over Rajasthan about two months ago seem to have played havoc not only with standing crops but with the flow of information as well: there is hardly any assertion about controlling locusts and the extent of damage caused by them that is not contradicted.

The latest controversy is about locust infiltration into Madhya Pradesh. When reports from the state came in about devastation caused by the pests in Mandasaur district in particular and the Malwa area in general, state agriculture secretary Alka Sirohi claimed, "Strong winds blew the locusts back into Rajasthan as soon as they had entered Madhya Pradesh." However, the following day, Union agriculture minister Balram Jakhar conceded there had been "considerable damage in Madhya Pradesh also."

In Rajasthan, though state authorities said the swarms had been neutralised, local reports indicated the pests had sneaked into Mewar and damaged substantially crops in Udaipur, Chittorgarh and Bhilwara districts.

Meanwhile, the UN Food and Agriculture Organisation has described the locust invasion as "unprecedented". This, coupled with predictions that the locusts will return next season, has led the Union government to revive its agriculture aviation wing to carry out pesticide spraying.