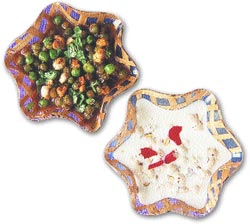 Makhana (Euryale ferox), or foxnut, is not a popular food item, in spite of its significance in religious ceremonies and fasts. Understandably enough, for the shrub flourishes in stagnant and dirty water. In India, it grows in the wetlands of Bihar, largely in Mithila, and in the ponds of Bengal. The makhana plant is almost completely covered in thorns. The fruits, which are ready by May-June, are round in shape, and about the size of a small orange. They carry about eight to twenty black seeds inside. These seeds are roasted and then cracked open. The outer black part of the seed falls off to reveal the puffed makhana seeds.

These seeds are, what is known in Ayurveda as vata pitta shamak. The medicinal properties of makhana are well-documented. It is effective in cardio-vascular diseases, post delivery care, leucorrhoea and circulatory problems. Makhana is also believed to increase hormone secretion.

The fruit has a high nutritional value. According to a report by the Council for Scientific and Industrial Research, New Delhi, it contains 9.7 per cent protein, 76.9 per cent carbohydrate, 0.1 per cent fat, 1.3 per cent minerals and 12 per cent water.

As things stand, though, the makhana plant finds itself prey to a variety of pests and pathogens. It is also being threatened by the indiscriminate use of pesticides, silting of wetlands and the spread of weeds like the water hyacinth. The tide may turn for the humble makhana, though. It is gaining prominence as a major cash crop in parts of Bihar, which accounts for about 75 per cent of India's total makhana output.

Growing makhana is an inexpensive affair. Seeds left over from the previous year's harvest germinate to make up the next season's crop. This cycle could go on for years. The only labour involved in cultivating makhana is to thin out overgrowths, and maybe collect dispersed seeds. There is no real need for fertiliser either. The makhana crop provides its own natural fertiliser -- the leaves that have fallen off the previous year's crop.

Every way you look at it, makhana has all the makings of both a health food fad, and the poor man's manna. It is easy to digest, highly nutritious and comfortably affordable.