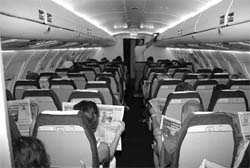 long distance air travel in the cramped seats of economy class can cause fatal blood clots, confirm doctors at Ulleval University Hospital in Oslo, Norway. A study by the clinic at Tokyo's Narita airport showed that in the past eight years 25 passengers had died due to blood clots after arrival at the airport.

About 100-150 passengers arriving in Tokyo are treated each year for blood clots, a problem dubbed the 'economy class syndrome'. It is believed to be caused by immobility and cramped seating in the economy class section on long distance flights. Prolonged sitting in a cramped position leads to what is medically termed deep vein thrombosis (dvt). "About 50-60 of the passengers treated for the problem have been in a serious condition," says Toshiro Makino, head of the New Tokyo International Airport Clinic. "The syndrome may have become well known only recently, but it has been around ever since people began flying," the physician adds.

The study conducted at Ulleval University Hospital in Norway put 20 healthy men in an atmospheric chamber, changed pressure and interiors to replicate the conditions inside an aircraft. These volunteers were allowed to carry out the usual indoor activities except physical exercise. They stayed in the chamber for about eight hours.

Medical observations made during their stay showed increase in the levels of two chemicals associated with blood clotting in humans -- prothrombin fragments 1 and 2 by 250 per cent and thrombin-antithropin complex by more than 800 per cent.

The researchers also point out that the sedentary posture and dehydration could be adding to the risk faced by passengers.