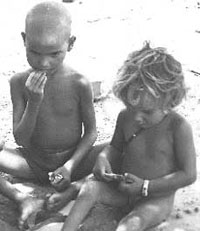 More than half the number of children under-five in South Asia and a third of those in sub-Saharan Africa are undernuturitioned. "The persistence of malnutrition has profound and frightening implications for children, society and the future of humankind," says Carol Bellamy, the executive director of the unicef.

The report says that the main causes of malnutrition are dietary deficiency including the lack of essential micronutrients such as iodine, iron and vitamin a. As a result, malnutrition is largely invisible. Three-quarters of the children who die from causes related to malnutrition show no outward symptoms.

The report, "The State of the World's Children 1998", as is called, says that about half the economic growth achieved by some countries over the past two centuries has been attributed to better nutrition and improved health and sanitation. The report suggests that if the poor nations of the world benefit from the recent breakthroughs in nutritional science, the number of deaths could be reduced.