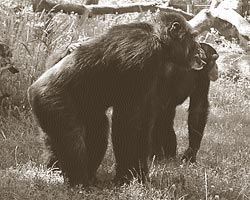 an aids-like epidemic wiped out huge numbers of chimpanzees around two million years ago, leaving modern chimps resistant to the aids virus and its variants. This hypothesis would explain why chimps, which share more than 98 per cent of their dna with humans, don't develop aids. The hypothesis stems from a study of dna conducted by the Netherlands-based Biomedical Primate Research Centre.

The researchers found that all the 35 chimps examined during the study had an unusually uniform cluster of genes in an area that controls their immune systems' defences against the disease. "The chimps showed more genetic variation than humans in all areas with this one exception," said Ronald Bontrop, who led the team.

According to him, this lack of genetic diversity suggests that a lethal sickness attacked chimps in the distant past. This unknown disease must have wiped out all or almost all chimps that didn't have the right immune system genes to fend it off, leaving the survivors with an uniform set.

The study also notes that chimps split into four subspecies around 1.5 million years ago. Since all subspecies represented in the study share the same genetic reduction, the researchers assert that the epidemic happened before the split.

However, there are some experts who do not agree with the findings. Luis Montaner, an associate professor at the Wistar Institute in Philadelphia, usa, who studies hiv, says that though the findings are intriguing, there is no definitive proof linking specific genes with resistance to aids in either chimpanzees or humans. According to him, chimpanzees' immune system appears to defeat hiv by targeting a part of the virus's proteins that don't mutate. A similar defence mechanism may be at work in humans who have been exposed to hiv repeatedly but don't get sick, he asserts. He opines that comprehensive studies need to be conducted for knowing what actually happens. Agrees Bontrop. "It's important to understand the mechanism of the disease and resistance in order to help develop vaccines," he says.