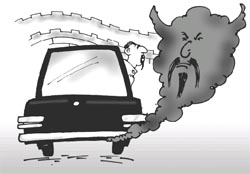 A new scientific method for forecasting urban air pollution in China has been lauded by a government-backed science committee comprising nine senior scientists. The method, considered a major breakthrough, combines numeric and statistical forecas-ting based on the spot observations.

In its appraisal report, the committee stated: "It is the most advanced research outcome in the field, and we think the method is practical and applicable." This new procedure is expected to help cities monitor pollutant discharges and prevent serious air pollution in China.

Wang Bentai, director of China's Environmental Monitoring Centre, said: "The new forecasting method and the computer system have proved to be very effective in Tianjin and Shenyang after more than two years of observation and application." To date, most Chinese cities are unable to forecast the extent of air pollution due to lack of a scientific measurement system.