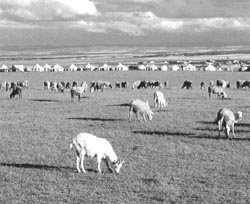 To "save" the city of Beijing, Chinese Prime Minister Zhu Rongji has ordered the killing of at least 300,000 cashmere goats in Inner Mongolia for "destroying the forests and causing degradation". According to government officials, this is leading to desertification, which is spreading towards Beijing at the rate of more than three kilometres a year.

Because of a prospering trade in cashmere wool, indigenous herdsmen have started rearing these mountain goats in large numbers. Authorities allege that the goats graze on the pastures and strip them bare. This has had considerable impact on the country's environment. Bare pastures have been blamed for the sandstorms that have swept Beijing several times recently.

Killing the goats will mean the end of an ancient lifestyle for many indigenous people. More than 1.2 million white mountain goats, whose wool known as soft gold can fetch more than us $40 a kilogramme, are herded in Alashanmeng county in Inner Mongolia. A spokesman for the Alashanmeng Animal Husbandry Bureau said, "We have too many goats. Due to the order, 500,000 goats will be moved and 600,000 sold. Of the rest, half will be killed for meat."