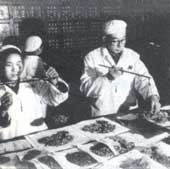 Chinese herbs are facing extinction due to increasing demand for herbal medicines. According to the natural medicine marketing report, prepared as part of a Sino-British project, the lucrative market for these herbs has led to large-scale pillage of wild flora. Sales of Chinese traditional medicine shot up by 113 per cent between 1990 and 1994 and demand is constantly outgrowing supply. China finds it difficult to regulate the large, fragmented industry which has about 1,500 firms and 13,000 farmers. Besides, there are problems in identifying wild and farmed versions of plants. The report says that there are at least 389 rare and endangered species, of which 77 are normally used in Chinese traditional medicine. Of the rest of the numerous medicinal plants, about 1,000 are used commonly, but only 200 of these are grown by farmers and the rest are gathered from the wild.