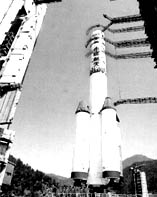 The nation's space programme seems to be jinxed. The latest in the series of failed launches is the us $128 million-ChinaSat-7 which veered off its course after take off and failed to reach its targeted orbit last month. With this debacle, the Chinese space programme has plunged further into gloom. The loss of this satellite has not only undermined China's poor record in satellite launches, but it also means that the Chinese could be out of the satellite business for some time to come. China's launch industry has a failure rate of 30 per cent, three times the international average.

The government had made ambitious forecasts that it would launch one satellite a month during late this year and next year. The loss of ChinaSat-7 has also raised doubts about the launch of another satellite, a replacement for the Apstar-2 which exploded after launch on a Long March rocket in January last year.