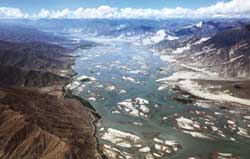 a controversial Chinese project -- the Greater Western Water Diversion Project -- that involves damming the Brahmaputra river and diverting 200 billion cubic metres of water annually to feed the Yellow River, when implemented, may affect India adversely. If the project comes through, it could strangle one of India and Bangladesh's biggest sources of water. Chinese foreign ministry spokesman, Liu Jianchao, has however denied these media reports.

The proposed project is part of the gigantic south-north water project that has already been started by China. In August, the Chinese government sanctioned about us $38 billion dollars to divert water from the upper reaches of the Yangtze in the Qinghai-Tibet plateau to the upper reaches of the Yellow River in north-west China. It will bring water from the Yalong, Dadu and Jinsha, tributaries of the Yangtze, to the Yellow River.

Water resources minister Wang Shucheng, however, told scholars at the University of Hong Kong, "In terms of today's scheme to develop the west, I will say three things it is unnecessary, not feasible and unscientific."

Anyhow, the idea is believed to be serious enough to engage New Delhi and Beijing in some serious consultations over the next few months. The proposed western route is worrying Indian strategists and policymakers.

The western diversion project is inspired by a book, How Tibet's Water Will Save China , by Li Ling. Picking up a great deal of support among the party leadership in Beijing, media reports have suggested this book detailed a proposal by hydrologist Guo Kai called Shuo-tian (reverse flow) canal, which proposes to divert the Brahmaputra.