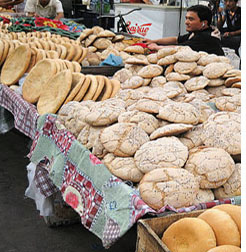 China has levied taxes on exports of food grains such as wheat, corn, rice and soybean from January 1, 2008. The move is apparently aimed at reining in surging domestic food prices, which have driven up inflation. Food prices rose by 18.2 per cent in November 2007, an 11-year high.

The export tax rates will range from 5-25 per cent and be levied on 57 categories of grain and grain products. The measure will discourage grain exports and help limit domestic grain prices, say researchers from the Institute of Market Economy, Development Research Center of China's cabinet--a State Council think tank.

The decision comes just a week after China scrapped a 13 per cent export tax rebate on 84 categories of grains and grain products. Those rebates, together with high international grain prices, boosted Chinese grain exports in 2007.

The export taxes, will remain in force until the end of 2008 and will mostly affect South Korea and Japan, who may now resort to other suppliers including the us, Brazil and Argentina. Economists expect the inflation to ease as new crops start coming to the market.