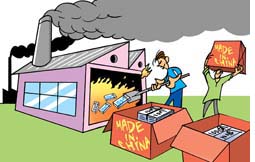 A recent report by environment groups has blamed Chinese banks for investing in environment-unfriendly and controversial projects within the country as well as in developing nations.

The report, Time to go Green Environmental Responsibility in the Chinese Banking Sector, was taken out by Friends of the Earth's us chapter and Utrecht-based BankTrack, a network of civil society groups and individuals.

The report cited controversial Chinese projects like the South-to-North water diversion project and the China National Machinery and Equipment Import-Export Corp, which are financed by banks in the country. It said China was financing controversial and polluting projects in other countries. Among them are China International Marine Container in Suriname, Kiani Kertas pulp mill in Indonesia, Belinga iron ore mine in the Gabonese Republic and Merowe Dam Project in Sudan.International banks, with large shares in Chinese banks, have also complained of their lack of green financing standards.