Chocks away for green plans

After years of controlling noise pollution, airports across the globe are now trying to curb water and air defilement 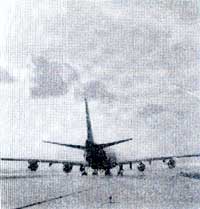 THE BOOM over houses not only set windows rattling but made insomniacs out of deep snorers. That was a couple of decades ago, at least abroad. So the airlines tried to go in for whispering engines. After all this hullaballoo and court cases against erring airports, a definition of acceptable noise levels has now been set by the International Civil Aviation Organisation, a United Nations agency that governs global air transport.

Now, authorities are gearing up for a major "greening" operation, in the wake of growing concern among environmentalists about the devastating impact that airports reportedly have over the quality of water and air in the surrounding areas. Airports and the Environment, a report recently published in the UK, shows that the industry is concentrating on chalking out fresh sets of environmental management programmes.

Water and air quality management, however, are areas that are just starting to be reviewed and regulated. Some reports say that civilian aircrafts alone emit 3 per cent of the carbon dioxide compared to that created by humans each year, as well as similar percentages of nitrous oxide and sulphur dioxide. A small percentage, admittedly, but its impact on the ozone layer is likely to be great because it is emitted at a high altitude.
The problem is brewing even at the ground level. It has been found that the chemicals contained in the conventional de-icers -- widely used by all airports to clear tarmacs covered with slippery hard-packed ice -- have the potential to cause severe surface water contamination.

In a bid to create a cleaner image, the beleaguered airline industry, beset with falling earnings, is setting new environmental standards for itself in order to up the financial ante. It is making efforts to improve air traffic methodologies and rules to minimise delays caused by aircraft stacking and circuiting and thus prevent excessive fuel consumption. And, at the Manchester airport in the UK, the authorities are investing substantial amounts of money to build new drainage systems designed to prevent water pollution.