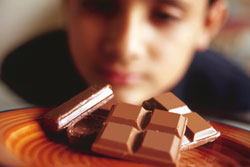 Did you think that chocolates are safe for your child? Think again. Chocolate firms are under scrutiny in California. Recently, the American Environmental Safety Institute, an environmental group, sued chocolate companies including Hershey and Mars for not disclosing the amount of toxic metals such as lead in their products, as required under California law.

The case was filed in Los Angeles County Superior Court. According to the lawsuit, the group said research shows children are at a high health risk from the dangerous levels of lead and cadmium in chocolate. However, the chocolate manufacturers dismissed the lawsuit as frivolous.

While accusing many chocolate companies such as Nestle usa Inc, the group charged these firms with violating California's Proposition 65 -- a consumer health law that requires warnings to be given to individuals before they are exposed to hazardous and dangerous chemicals. In its lawsuit, the institute said it is seeking an injunction to require warnings on chocolate products before they can be sold.