Through a group of viruses 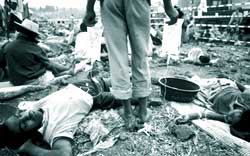 an international study suggests cholera epidemics may end due to prolific growth of viruses called cholera phages that eat the disease-causing bugs. The study was conducted by scientists from Kolkata-based National Institute of Cholera and Enteric Diseases, Dhaka-based International Centre for Diarrhoeal Disease Research and Harvard Medical School in Boston, usa (Proceedings of the National Academy of Sciences, Vol 102, No 5).

Researchers analysed water samples taken from two rivers -- Buriganga and Turag -- and the Gulshan Lake, all three in Dhaka, where cholera epidemics occur every year. They found the samples contained six types (jsf1- jsf 6) of cholera phages of which jsf 3 was specific for Vibrio cholerae 0139 strains, whereas all the others were specific for V cholerae 01 strains. "In countries like Bangladesh and India, which are ravaged by cholera epidemics, environmental surveillance for cholera phages could be useful in tracking outbreaks and in predicting epidemics and new cholera strains," says Shah M Faruque, the lead author of the study.

"Cholera phages might even be employed as biological control agents," says co-author Amar Nath Ghosh. In another study ( pnas , April 26, Vol 102, No 17), the same team found jsf 4 killed an antibiotic-resistant 01 strain that caused a cholera epidemic in Bangladesh in August 2004.