From candles and incense 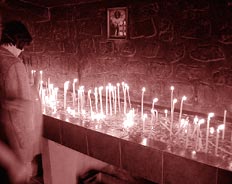 burning candles and incense in the church can release dangerous levels of potentially carcinogenic particles, warns a recent study conducted by scientists at the Maastricht University in the Netherlands. The team examined the air quality in churches, as these are poorly ventilated with candles burning all day and frequent use of incense.

The researchers measured the particulate matter (pm) concentration in a small chapel and a large basilica in Maastricht after lighting candles for nine hours and simulating a service in which incense was burned. The team found particulate matter less than 10 microns (1 micron equals one thousandth of a millimetre), or pm 10, in the air at levels of 600-1,000 microgrammes per cubic metre -- more than four times higher than before the start of the first morning mass and representing 12-20 times the European permissible concentration over 24 hours. The particles can penetrate deep into the lungs and trigger various lung and heart diseases. Besides pm 10, high concentrations of polycyclic aromatic hydrocarbons (pahs) and various types of free radicals were also found. While pahs are known to be carcinogenic, free radicals are highly reactive molecules that damage lung tissue and can trigger respiratory ailments such as asthma. pah concentration was found to be considerably higher than the air beside roads used by 45,000 vehicles daily. The results appear in the December issue of the European Respiratory Journal (Vol 24, No 6).

Priests and people working for long hours in churches are at greater risk of developing respiratory diseases than ordinary worshippers, who usually stay inside only for a short while. "While we still have to assess more precisely what level of risk these people are running, this discovery is very worrying," says Theo de Kok, the lead researcher. Says Richard Russel of the British Thoracic Society, "Particle pollution, whether outdoor or indoor, can be a danger to lung health and cause diseases such as emphysaema and bronchitis.