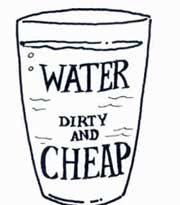 THE BRITISH public is faced with a grim choice: clean versus cheap water. In a recently released document, The Cost of Quality, Ian Byatt, director general of water services, predicted the cost of water in Britain would double by 2005. He questioned the stringent standards for drinking and bathing water set by the European Commission (EC) and stated bluntly, "the issue is not one of health but of perfection." He illustrated his point by asking consumers to consider whether a teaspoonful of sewage in five gallons of river water is not too high a standard, and would they accept two teaspoonsful of sewage in the water if it meant considerably lower utility bills. The report has opened up a can of worms: the question of EC's standards. According to the report, the EC requires a detection rate on pesticides equivalent to an aspirin tablet in an Olympic swimming pool.

The report suggests the application of the principle of the polluter pays, under which a tax on nitrates and pesticides should be paid by farmers and local authorities, rather than the consumer.