Next phase of India's clean coal initiative in the pipeline 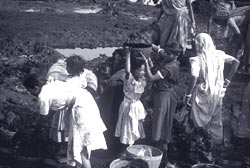 a strategy is being chalked out to make the washing of mined coal mandatory in India. There is no gainsaying the fact that such cleansing can rid the mineral of impurities. At the same time coal washing itself is a highly polluting process. Its environmental implications can, therefore, prove to be double-edged. Consequently, the Union ministry of coal and mines -- while striving for the proposal's speedy implementation -- is moving forward cautiously.

"The plan is being mulled over expeditiously but the final decision is awaited," reveals a senior official of the ministry. In most industrialised nations, coal washing is the order of the day. "It is actually an integral part of mining industry's lifecycle," points out Gurdeep Singh, professor at Centre for Mining Environment, Indian School of Mines, Dhanbad. But in India, only about 16 per cent of all mined coal is put through the process. Currently, 21 washeries are operating in the country with a total installed capacity of about 39 million tonnes per annum.

"Using washed coal significantly reduces the release of particulate matter into ambient air. The emission of other noxious gases is also much lower," asserts Singh. "But coal washing is a polluting activity which requires a clearance from local pollution control boards," discloses the ministry official. Singh elaborates: "During the final stages of cleaning, effluents from the washery are passed through a thickener. If there is no electricity, this contaminated slurry laden with carbon particles is discharged into rivers and other waterbodies." He illustrates the case of Damodar river in Jharkhand and West Bengal, which has borne the brunt of the pollution caused by numerous washeries sited on its banks. "Slurry deposits on the riverbed are common at several points," observes Singh. He also highlights a few instances where washeries deliberately release slurry into the waterbody since it "contains carbon particles, and can be dried and sold as a source of energy".

The solution, according to Singh, is the involvement of big private players. He opines that they would be in a position to run washeries more efficiently than smaller entities or public sector undertakings (psus) because setting up and operating such units is a capital-intensive exercise. In fact, psu Coal India Limited (cil) made it clear at a recently held seminar in Kolkata that the cost factor was preventing it from establishing in-house washeries. Its line of reasoning may be justified, as setting up a coal washery with an annual capacity of 1 million to 5 million tonnes requires an investment running into crores of rupees.

"With psu s throwing up their hands, private sector participation in the field is inevitable," avers Gautam Kumar, president of Coal Consumers' Association of India (ccai), a Kolkata-based body of industrial coal users. But private players have so far been negligent on this front. "Either coal washing is not done at all or it is outsourced to small operators," alleges an industry source. As it is, Indian coal has high ash content which is difficult to remove. Worse still, these operators do not have the know-how to function on a large scale. Experts feel that all those benefiting from the activity should share the financial burden.

"Since washing is a pre-combustion process, it will ensure that no impure coal is burnt. This would mean lesser emissions and heightened efficiency," stresses Singh. "If only washed coal (which would contain significantly less ash) is fed to a power plant, its output will go up and the unit would become environmentally compliant as well," adds Singh buttressing his argument. "The power and cement industries have shown their preference for using washed coal," says the ministry official.

"Making coal washing compulsory is a part of the government's clean coal technology initiative," reveals the official. In June 2001, the Union government had stipulated that no coal transported over 1000 kilometres should have an ash content higher than 35 per cent. "But this did not have the desired effect, as mining companies started blending pure and contaminated coal rather than opting for coal washing," laments Singh. The current proposal can, however, go a long way in the greening of the coal sector and its ancillary industries -- provided the path adopted is environment-friendly.