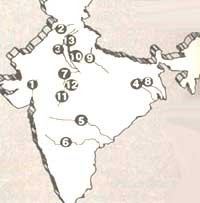 THE MINISTRY of Environment and Forests has asked the Planning Commission to earmark Rs 250 crore during the eighth five-year plan as the centre's share in the proposed national river action plan (NRAP) -- a programme to clean up polluted stretches of 19 rivers -- in which states will bear an equal financial burden. But after all the money has been spent on the purification, the river waters will still not be fit to drink.

According to surveys, most stretches of Indian rivers -- particularly along industrial belts -- are not suited even for fishes. While the NRAP does not initially include the Ganga, for which the Ganga Action Plan (GAP), fully financed by the Centre, was launched in 1985, the second phase of GAP will be merged with the national plan in 1993. At this point, the eighth plan outlay for the cleaning of rivers will be Rs 1,115 crore, with the states contributing 45 per cent.

However, given the extremely polluted condition of the rivers, their quality is expected to improve only slightly despite the enormous sums that will be pumped in to treat them. None of the polluted river stretches will be re-classified as under category 'A'-- a source of water which can be drunk without conventional treatment but after disinfection. The "desired class," after the programme is implemented, will be either 'B' -- suitable for outdoor bathing -- or 'C' -- feasible for drinking after conventional treatment and disinfection.

If the water is good enough for propagation of wildlife and fisheries it is classified as 'D.' The lowest category, 'E,' covers water fit only for irrigation, industrial cooling and controlled waste disposal.

The polluted stretches of 13 rivers are classified as the worst (category D or E) and those of five as less polluted (category C or D). Some portions of the Kaveri listed as less polluted are under study. (see tables) Clearly, the days of drinking river water are over.