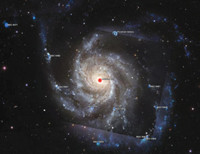 google Sky images of the night sky have become clearer. New colour images taken at different wavelengths were added to the interactive online feature on October 2. Each image contains specific information about space. They were taken as part of the All-wavelength Extended Groth Strip International Survey (aegis) which has been observing the Extended Groth Strip, a section in the cosmos.

aegis combines the efforts of about 100 researchers from across the globe. The images show the strip in visible, ultraviolet, infrared and x-ray wavelengths. "Some galaxies look brighter at certain wavelengths than others, which carries important information about their composition and the processes occurring within them," says Sandra Faber of the University of California who is an aegis team member. The strip is estimated to contain about 50,000 galaxies--some so distant that it takes more than 10 billion years for light from them to reach the Earth. "We are looking back to a time when the universe was more than half its current age and when galaxies were forming most of their stars," says Kirpal Nandra of Imperial College, the uk, another member the aegis team.