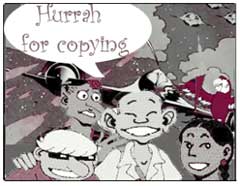 "Creativity makes the world go round," says a comic strip of the World Intellectual Property Organization (wipo). T he strip preaches the benefits and virtues of intellectual property rights. "You can make money from art, just claim copyright," it advises.

But can there be a world where there is no copying? That's the question posed by a comic strip that counters the wipo one. The strip is the creation of the Alternative Law Forum (alf) -- a collective of lawyers based in Bangalore, Karnataka. "We produce art, not rabbits out of a hat," is alf' s riposte. Their comic strip is actually a clever remix of the wipo version.

In doing so, it completely subverts the message of the big daddy of intellectual property rights.

The wipo comic strip has youngster Marco, who nourishes artistic ambitions. But his parents are utterly unsympathetic. "Art doesn't pay," they berate him. However, the child learns that art does pay. So far so good. But soon the story of art as viable commercial proposition morphs into a series of platitudes on copyright.

alf's subversion starts right with the cartoon strip's title: 'Copyfight'. Here, overly virtuous parents disparage little Marco for downloading music from the internet and then remixing it. For them that is tantamount to copying "But how can one create without copying? Even Disney can't think like that," quips the kid. One of his sympathisers -- an artist himself -- joins in: "As I grow older, I realise that if copyright had existed, I could never have been so creative without paying heavy licence fees."