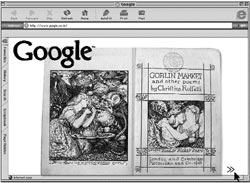 Online Literary Texts usa
The long-predicted global virtual library is one step closer, thanks to a multi-million pound deal which would make literary texts available at the click of a mouse. The California, us- based Google Inc has announced its collaboration with a few of the world's top libraries to convert the world's greatest literary treasures into digital files that would be freely searchable over the Web. The goal is to create a revolutionary new digital card catalogue and searchable library for books, scholarly papers and other acclaimed collections.

Ancient and modern literary gems from Harvard, Oxford, Stanford and the New York public libraries in the us could become available to worldwide browsers. Google has agreed to underwrite the projects. It has also committed its technical abilities to scan and digitise tens of thousands of pages from the libararies. Amazon and Google already offer programmes, which provide a glimpse of new literary texts online. But Google's latest commitment could have the biggest impact yet, given the breadth of material that the company hopes to put into its search engine -- renowned for its processing speed, ease of use and accuracy.

"This important step is part of a trend to democratise access to information, making it accessible to a worldwide network of knowledge seekers. So far literary texts are available only to small, select groups of students and scholars," said Paul LeClerc, president of the New York Public Library. "It's a significant opportunity to bring our material to the rest of the world. The move could solve an old problem: if people can't get to us, how can we get to them?" he exulted. Fabio Selmoni, Google's director for European operations, confidently declares, "We have the audacity to believe that one day Google will provide all the world's information online."

But hold on. Many librarians involved predict the project could take at least a decade to bear fruit.