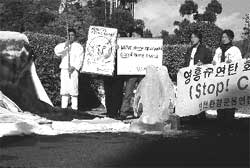 The government is gearing up a national drive to cut greenhouse gas emissions in line with the agreement reached at the international climate-change conference at Kyoto in December last year.

Japan's Environment Agency ( ea ) and the ministry of international trade and industry ( miti ) are working separately on bills designed to encourage businesses to join the campaign against global warming. But the bills mainly target the factories, auto and power plants and include no measure to combat the ever-increasing emissions from the houses and offices.

The ea is drafting a bill that -- if approved -- would require all factories emitting more than 2,000 metric tonnes of carbon dioxide a year to formulate plans to reduce this figure and submit these plans to their local prefectual governors. The bill will affect most of the power plants, steel mills, cement factories as well as major land-transportation companies, covering more than 92 per cent of all industrial sector carbon dioxide emissions.

miti, on the other hand, plans to revise a law that will encourage efficient use of energy in its bid to impose energy-saving measures on about 9,000 factories that use up more than 1,500 kilolitres of crude oil annually.

The bills should be the primary means the government uses to reach its self-imposed target of slashing carbon dioxide emissions to seven per cent lower than the 1990 levels by the year 2010. If nothing is done, industrial emissions, at its current rate of increase, are projected to grow by five per cent by the year 2010. This implies that all companies will be required to cut their emissions by more than 10 per cent in the coming years. And although the companies will draft plans to slash emission, these will not be legally binding, and the bills only empower the Union and local governments to exhort those not doing enough to do more.