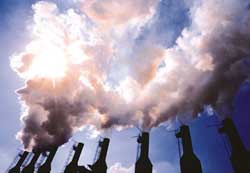 The European Commission (ec) has begun infringement procedures against European Union (eu) member-states over violations of eu's climate change legislation. "The eu is committed to international efforts to combat climate change, which requires that we meet all our reporting obligations," says environment commissioner Stavros Dimas.

This step will ensure that all eu member-states meet their obligations under the United Nations Framework Convention on Climate Change (unfcc) and the Kyoto Protocol and also make the eu Emissions Trading Scheme fully operational.

Cyprus, Greece, Luxembourg, Malta and Poland were sent written warnings because they have still not linked up to the eu -wide electronic registries system for emissions trading despite a December 2004 deadline.

In other cases, under the unfcc and the Kyoto Protocol, eu members must regularly report policies and measures put in place to reduce greenhouse gases and assess future emission levels. But Austria, Cyprus, Luxembourg, Malta and Poland failed to communicate this information for the year 2004 by March 15, 2005, and have been given a second and final written warning by the commission. The first warning was sent in October 2005.

The same decision also requires members to report their greenhouse gas emissions of the previous year by January each year. But Cyprus, Italy, Malta and Spain were warned against their failure to do so for the year 2004.

Under Kyoto's first commitment period -- 2008-2012 -- an international emissions trading regime is to be established eu member-states are required to submit to the ec information to determine the "assigned amount" they will be permitted to emit in line with their Kyoto target Germany, Italy, Luxembourg and Spain were warned because of their failure to submit the necessary information.

If a member state fails to comply, the ec may decide to bring the case before the European Court of Justice, which could impose financial penalties on member states.