The bug that gives stomach grief—Helicobacter pylori—may help breathe easy. A study has found that the infection with the gastric bacteria protects against allergy-induced asthma. It also confirms that the increase in allergic diseases in industrialised nations is linked to vanishing microorganisms that populate the human body. H pylori is resistant to gastric acid.

But is killed with antibiotics. The researchers infected mice with H pylori and found it triggers accumulation of T-cells, crucial for the suppression of asthma. Journal of Clinical Investigation, July 2

Bacterial and viral infections do have the same symptoms but different treatments. Determining the source of infection at the earliest is crucial to begin the right treatment. The tests in use to identify infections are time-consuming and not always accurate. Now researchers have developed a test that will make quick diagnosis. The immune system of patients with bacterial infections behaves differently from the immune system of patients with viral infections, and the test is based on these differences. It analyses the chemical markers of circulating phagocytes that act as major players in the defence response. The type of markers vary with the infection. Analytical Chemistry, June 1 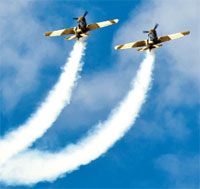 Aeroplanes can punch holes through the clouds and trigger rain and snow fall. Researchers have found this happens under certain atmospheric conditions—cloud layers with temperatures of -15°C or lower.

When planes fly through these layers, the tips of their propellers make the surrounding air rapidly expand and cool. The supercooled water droplets in the clouds then freeze into ice particles and turn into snow or rain as they fall. Science, July 1

Geology
Not so hot 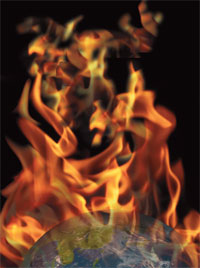 Around 50 million years ago, Earth was the hottest in the planet’s history. But new evidence indicates the temperature may not have been quite as high as previously thought. Scientists analysed chemical signatures trapped in the fossilised shells of molluscs that lived in what is now Alabama.

Cataract—an eye disease that affects people over 40— is caused due to clumping of long-lived structural proteins of the eye lens that contribute to its transparency. But it was unknown why and how the clumping occurs. Now scientists have found the mechanism of this crystallin polymerisation. They say there is an intermediate protein structure in the lens which has a folded and an unfolded domain. Exchange of precursors that aggregate proteins from folded domain in the structure to unfolded domain causes clumping. PNAS, June 13 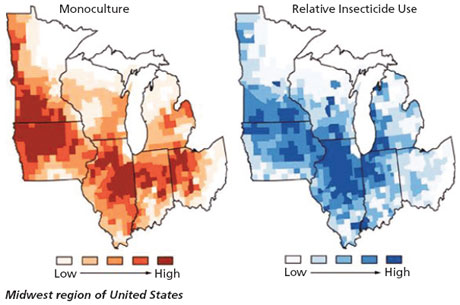 The continued growth of cropland and loss of natural habitat like grasslands have increasingly simplified agricultural landscapes and this has led to crop pest abundance and increased insecticide use. While the relationship between monoculture, crop pest pressure, and insecticide use has been suggested before, it has not been well supported by empirical evidence. Now a study documents a link between monoculture and increased insecticide use. The researchers carried out the study in the Midwest region of the United States. They found that monoculture was associated with annual insecticide application to an additional 5,400 square miles in the Midwest—an area the size of Connecticut. They warn that this increased use of insecticides will affect perennial grasslands that are a good source of bioenergy. PNAS, July 11 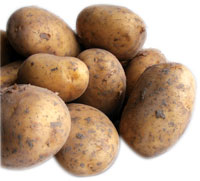 Scientists have finally uncoded the genetic blueprint of the potato. Solanum tuberosum or potatao is the world’s fourth most important food crop and is vital for global food security. But its sequencing has been delayed due to the genetic complexity. The team found that potato’s genome comprises more than 39,000 protein-coding genes, has four copies of every chromosome—heterozygous autotetraploid.

There is also considerable variation among the corresponding four copies of each gene. This is in contrast to the two copies in humans. They also identified around 800 disease-resistance genes, each of which has a potential to fight diseases such as potato cyst and potato blight. Nature, July 12 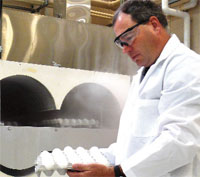 The ability of the eggs to fight bacteria such as Salmonella is reduced once they are laid. Now Kevin Keener, a researcher at Purdue University in the US, has found a way to sustain the defenses. Freshly laid eggs are saturated with carbon dioxide and have pH levels of seven. Over time, the pH level rises to nine and carbon dioxide escapes.

As that happens, lysozyme, which defends egg whites from bacteria becomes less active. The researcher has designed a cooling technology that uses carbon dioxide snow to rapidly lower the eggs’ temperature. This saturates the inside of an egg with carbon dioxide and keeps pH levels suitable for lysozyme activity. Poultry Sciences, May 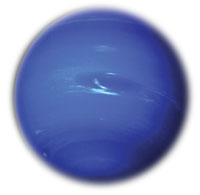 Neptune, which was discovered on September 24, 1846, completes one Neptunian year. If you lived on Neptune, a year would amount to 164.79 years on Earth. The ice-capped planet, which is the farthest from Sun in the solar system, was not discovered by observation but by mathematical calculations.

Astronomers had been perplexed by Uranus’ orbital trajectory—the planet did not revolve around the Sun the way it was expected to. It became clear there was another heavenly body exerting its gravitational pull. Two scientists, Urbain J J Leverrier and John Couch Adams independently worked on mathematical calculations to locate the position of the unknown body. Neptune was finally sighted by Johann Galle at the Berlin Observatory on a tip-off from Leverrier. Dense methane clouds render it a blue appearance.