The average height of the Himalay has been going down over the last two million years because of climatic changes, surveys indicate. 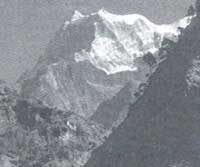 THE AVERAGE height of the Himalaya was once much higher, the Ganga flowed much further north along the foothills and the Indus flowed east into the Ganga. All this changed about two million years ago -- not all that long ago in geological time.

In the early 20th century, German astronomer and meteorologist Alfred Wegener proved that the Himalaya resulted from a collision between the continents of Gondwanaland (now the Indian subcontinent) and Upper Asia. While later findings show the Indian continental plate is still thrusting itself under the Asian plate at the same rate as in the last 24 million years, recent surveys suggest that climate changes have also contributed towards making the Himalaya what they are today -- shorter and more broken than they were previously.

Douglas Burbank of the University of California supports this theory with evidence provided by the river systems flowing out of the Himalaya (Nature, Vol. 357 No 1828). When mountains are created through continental collision, a wedge-shaped depression is created at the foot of the mountain range. Burbank points out that before the Ice Age, about two million years ago, the Ganga flowed parallel to the Himalaya in the wedge just off its foothills and the Indus and the Jhelum flowed eastwards into the Ganga.

During the Ice Age, flow patterns of the Himalayan rivers changed significantly. Glaciers caused large-scale erosion, cut up the range into deep transverse valleys and compressed and thereby thrust up intervening peaks, even while they were heavily eroding the range as a whole. The Himalay, prior to the Ice Age, were higher on average than at present, and less broken. The average erosion in the Nepal Himalay today is even more than the average upthrust.

Within the last one million years (in the Holocene age), Burbank argues, glacial action levelled the wedge at the base of the range, forcing the rivers to flow further south in the plains.

Exactly when the Indus began its westward flow through the semi-arid regions of the Punjab is unknown for Burbank shows geological evidence to prove there was no glacial action in the Hindu Kush, along which the Indus flows.

However, it's still too early to reach a firm conclusion regarding the matter, Burbank points out, adding that further studies of the changes that took place in the period between 65 million years ago and two million years ago are needed to prove this hypothesis right.