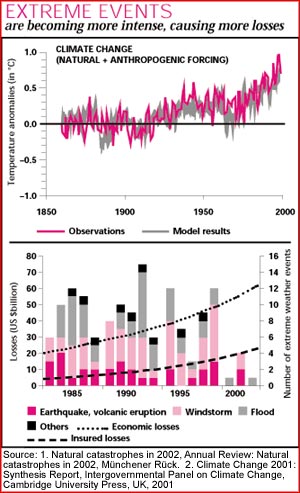 a tiny kingdom of subsistence farmers in Africa is hungrier than ever. In January 2003, rainfall patterns of Lesotho altered suddenly, ushering in untimely frost and severe storms that destroyed most of the standing crops. "Frost in the summertime! We never used to see weather like this. We don't know what to expect anymore from the skies. I think God is angry with us, but I don't know why," says Makhabasha Ntaote, a 70-year-old matriarch.

Scientists have a possible answer to Ntaote's question. They predict that nearly a third of Lesotho's 2.1 million residents will soon require aid, as the mainstay of their economy suffers the impacts of global warming. According to the World Meteorological Organization (wmo), this year the impacts would be more apparent than ever before worldwide in the form of extreme weather events.

The specialised climate science agency of the United Nations normally confines itself to issuing scientific reports and statistics at the end of each year. However, the extreme oddities of weather patterns this year compelled the organisation to issue a warning recently. Already, a pre-monsoon heat wave in India has resulted in temperatures over 45c (2-5c above the normal), killing at least 1,400 people. In Sri Lanka, heavy rainfall resulting from a tropical cyclone exacerbated wet conditions from May onwards, leading to flooding and landslides that killed at least 300 people. In January, Fiji suffered the impacts of its worst cyclone since 1987.

Industrialised countries have not fared any better. At least 562 tornadoes hit the us in May, killing 40 people. The is much higher than the previous monthly peak of 399 storms recorded during 1992. In June, some places of southern France experienced temperatures above 40c (5-7c more than the long-term average). Switzerland witnessed its hottest June in the past 250 years -- daytime temperatures have not fallen below 25c in Geneva since May 29, making it the warmest June ever recorded. This June was also the hottest in England and Wales since 1976, with average temperatures being 16c.


None of these events are truly remarkable when considered individually. But together they represent a clear and alarming trend towards wilder weather conditions. "These extreme events all go into calculating the monthly and annual averages which, for temperatures, have been gradually increasing over the past 100 years," says Kenneth D Davidson, director of the World Climate Programme, wmo. According to recent reports of the Intergovernmental Panel on Climate Change, the global average surface temperature over the 20th century has increased by around 0.60c. This value is about 0.15c more than the previous estimates. Global average land and sea surface temperatures in May 2003 were the second highest since 1880. "Soon 2003 may be the hottest year ever recorded," asserts Davidson.

To date, the 10 hottest years in the 143-year-old global temperature record have all been after the 1990, with the three hottest being 1998, 2002 and 2001. Extreme weather events also increased during this period -- there were 63 weather-related disaster declarations in 1998, far more than the average 21.7 disaster announcements made per year during the 1980s. For instance, there were 26 flood disasters worldwide in the 1990s, but just 21.7 per year during the 1980s. The frequency and intensity of extreme weather increases due to a change in the distribution of heat, which disrupts the flow of energy through the climate system, altering the circulation patterns of the atmosphere and oceans, and modifying the Earth's hydrologic cycle. Higher temperatures also increase evaporation and transpiration, and raise the air's capacity to hold moisture, making more of it available to fall as rain and snow.

With the weather becoming unpredictable, both human casualties and economic losses have increased over the years. In the 1980s, the world's property insurers lost an average of us $2 billion annually to extreme weather events. But in the 1990s, losses exceeded us $12 billion annually. For just the first 10 months of 1998, weather-related expenses (us $89 billion) far exceed the losses for the entire decade of the 1980s.