Impacts of climate change in the Himalayas 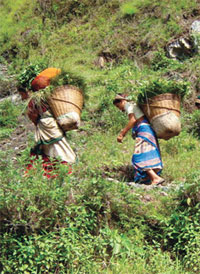 THE Himalayas are warming at a rate higher than the global average. A recent study documents how this has affected cropping patterns and vegetation in the past 10 years.

The questionnaire-based study examined changes people observed between the altitudes of 600 metres and 2,200 metres in the Himalayas. Publis­hed in the journal Current Science on March 25, it shows the flowering and fruiting time of economically important trees has changed.

Yields of cash crops like potato, ginger, peas and beans are no longer what they used to be a decade ago. The pear tree, which bore fruits in July, now also give fruits in December and January.

About 10 years ago, the invasive weed Eupatorium showed up at an altitude of 1,000 metres. After a years it was seen higher at 1,800 metres.

“Local observations could be used to devise mitigation and adaptation strategies on regional scales,” says P K Joshi, lead author of the study and associate professor at Teri University.

K S Rao, department of Botany, Delhi University, however, says, “One needs to give weightage to ecological studies to learn the flexibility of organisms to adjust to change rather than blindly accept climate change by interviewing people.”