INDIA often finds itself in the midst of debates on climate change. But there is very little country-specific research available to guide climate-related policy. In 2010, researchers and policy advocates on climate change came together to form a network to promote quality climate research in the country. Three institutes, IIT-Delhi, IIT-Madras and Centre for Science and Environment (CSE), established the Indian Climate Research Network (ICRN). The network boasts over 150 members.

The aim of the network is to ensure that climate change debate reaches a wider audience in the country, bridge the communication gap between the scientific community and those outside it and provide the fledgeling research community a platform to come together for discussions and debates on climate change. ICRN held its third national research conference from November 3 to 4 at its most recent addition, the Indian Institute of Science in Bengaluru. The conference showcased the best climate change research being carried out in the country. Over 70 presentations and posters on the science of climate change, its mitigation, adaptation and impacts were discussed. “The quality of presentations at the conference has definitely improved but we still have a long way to go before reaching international standards,” says Krishna Achutarao, professor at IIT Delhi, who is one of the networks’ founding members.

Sudhir Chella Rajan, professor at IIT-Madras, says climate change research is a challenging proposition given the wide set of domains such research encompasses in general. “There are certain issues which are unique to the Indian context, such as monsoons, Himalayan glaciers and energy poverty. It is heartening to note that such issues now constitute the bulk of Indian research,” says Rajan. “But in terms of quality, we probably have some distance to go, mainly because we don’t see researchers working systematically to cover broad domains. Perhaps ICRN could play a role in encouraging such work.”

Ambuj Sagar of IIT-Delhi says so far most of the debates on climate change in India are opinion-based. He says there is need to generate more research based data to support the opinion. In international negotiations on climate change, India has been constrained in the past due to lack of quality research within the country. In this context, Sunita Narain, director-general of CSE, says, “Climate change is a highly political issue but the science is needed to shape the discourse. It is imperative that Indian scientists do their own research in this context.”

Snapshots of some interesting studies presented at the ICRN conference in Bengaluru:

Valued at Rs 350 crore, the oil sardine fishery in India is a massive export-oriented fishery. It is a low-priced fish that provides nutrition and sustenance to millions. Back in the 1960s and 70s, it was found only on the western coast of India. But over the years it has extended its territory to the east coast as well. E Vivekanandan of the Central Marine Fisheries Research Institute in Chennai says oil sardines, tropical fish with a preference for warm waters, normally live in seas with a water temperature above 28°C.

Climate change has caused sea surface temperature along the Indian coasts to rise, thus providing these fish with new grounds to inhabit. He says it is important that such information gets effectively communicated to the fisher communities to help them adapt to changing fishing patterns and ecosystems.

Releasing sulpahte aerosols into the stratosphere to reflect sunlight is one of the several potential geoengineering methods proposed to counter global warming. Angshuman Modak from Indian Institute of Science in Bengaluru explored the sensitivity of climate to distribution of sulphate aerosols at different latitudes. 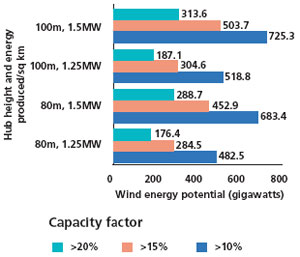 The most popular estimate of the amount of electricity that can be produced in the country through wind energy is 49-103 gigawatts, done by Chennai-based Centre for Wind Energy Technology (CWET).

These figures have been contested and studies by different institutes have arrived at higher figures for the wind energy potential of the country.

A reassessment done by two researchers at IIT-Delhi, Chetan Krishna and Abhishek Malhotra, using realistic parameters puts the potential at 313 gigawatts at 20 per cent capacity factor.

The factor is the extent to which an area can satisfy an identified parameter, such as the height of the wind turbines. Lower the capacity factor, less suited is the site for wind energy production.

Greenery is giving way to concrete jungles in Bengaluru, the garden city of India. Harini Nagendra from ATREE, a research institute in Bengaluru, provided a narrative on how urbanisation is leading to removal of trees.

She compared the suspended particulate matter and temperatures on roads with and without trees in different localities.

Roads with trees had significantly lower level of suspended particulate matter and temperatures up to 3-5°C lower than those without trees. With over 600 million people expected to be living in cities by 2030 in India, her study makes a case for increasing tree density in cities.

The lachenpas and the dokpas are nomadic shepherd communities on upper slopes of the Eastern Himalayas in Sikkim. They have responded to changing climatic patterns using indigenous knowledge. Tenzing Igty of ATREE, a research institute in Bengaluru, interviewed members of these communities to show how traditional ecological knowledge can complement scientific studies, especially in a region like the Eastern Himalayas with limited literature available on climate change impacts.

Interviews with the Dokpas reveal that a combination of less snow, shorter winters and erratic rainfall has made the pastures drier leading to poor quality of grass. Due to this their sheep are dying. They have now started replacing physically weaker sheep with yaks as an adaptation strategy.

In turn, the Dzumsa, their governing body, stepped in to ensure the price of sheep remained stable and placed a ban on slaughter and sale of sheep. In another instance, the Dzumsa, which traditionally oversees the type and timing of crops for different villages, introduced crops like maize, cabbage and pumpkin which previously could not grow at such high altitudes.

Vulnerability index
With the growing need for adapting to climate change, comes the need to prioritise areas for resource allocation, based on their exposure and vulnerability. Based on factors like robustness of agriculture, industrial activity intrusion and water and sanitation, Namrata Ginoya of Environmental Management Centre, a consultancy in Mumbai, assessed the extent to which six villages in Anjar Taluka of the Kutch region are vulnerable to climate change.

She surveyed 110 households, covering factors like socio-demographic profile, health, water, food and livelihood, to arrive at vulnerability indices for each of the villages. Based on the study, Vira emerged as the most vulnerable village of all. Ginoya proposes developing a climate-resilient plan for this village, taking into account its economic, demographic and ecological capacities.

One of the options, as suggested by her, is regeneration of severely damaged mangroves along the village coast that act as barriers against storms and boost the value of fishery.