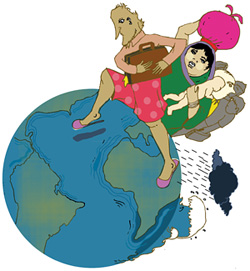 Seventeen million people were displaced by natural calamities in 2009 and 42 million in 2010. With events like floods, drought and sea level rise getting intensified by global warming, experts fear that migration would increase further in the next 50 years. Between 2000 and 2060, the number of people living in flood-prone areas in Asia and Africa will soar by up to 192 million, engendering diverse challenges for policy makers.

If not managed properly by policymakers, migration may spin out of control and cause more misery, say researchers commissioned by the UK government. The group published their findings, Foresight: Migration and Global Environmental Change, on October 20, 2011. The report drew from more than 70 papers and experience of 350 experts from around 30 countries. They say that governments across the world need to rethink their strategy on climate-induced migration. This goes to show that unplanned and haywire migration can actually expose people to more hazards.

South Asia is especially prone to migration-related problems. In places like Bangladesh, every year thousands of rural people are forced to relocate to urban areas like Dhaka or Chittagong due to floods and soil degradation, putting immense pressure on cities. Last year’s floods in Pakistan internally displaced closed to 17 million people.

However, migrating to supposedly safer locations will not be as easy–poorer find it harder to relocate as migration requires heavy investment. For example, during Hurricane Katrina, richer households were able to migrate to safer locations, leaving behind poorer people who lacked resources necessary to relocate. At other times, national policies come in the way of people escaping vulnerable areas. For instance, an estimated 1.5–2 million Zimbabweans have migrated to South Africa in the past 10 years. A xenophobic attack on the migrants in 2008 left 65 people dead.

The report suggests that policy makers would be better off seeking ways to make migration organized and people friendly.  “Preventing or constraining migration is not a ‘no risk’ option. Doing so will lead to increased impoverishment, displacement and irregular migration in many settings, particularly in low-elevation coastal zones, drylands and mountain regions.” The authors have asserted that migration may have always been presented in a bad light, but preventing migration is not always the right approach. In fact, “planned and well-managed migration can be one important solution for this population of concern.”

The authors suggest ways this can be achieved: granting rights to migrants, formulating international schemes that facilitate migration to countries with a declining population and making urban planning schemes that keep in mind the likelihood of continuing rural–urban migration due to climate change. "Particular schemes of temporary and circular migration could enable international migrants with a wide variety of skills to play a role in countries with demographic deficits. This could be most effective where opportunities and thus movement are within regional groupings of countries," the report adds.

Experts believe lack of international policy is a big challenge in tackling environmental migration. “At the moment, no country has a comprehensive policy to address environmental migration, this is still an emerging issue,” says François Gemenne, research Fellow at the Institute for Sustainable Development and International Relations (IDDRI) at Sciences Po, a social sciences research and teaching institution in Paris. Gemenne has called for environmental migration being framed under development agenda. “While others have tried to frame it as a humanitarian or security issue, I think it is important to recognise that it is, first and foremost, a development issue. This means environmental migration is not a fatality, and that we must ensure that the people have the right to stay where they are, but also that those who cannot move are provided with migration options and opportunities.”