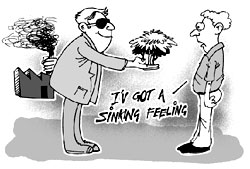 THE Intergovernmental Panel on Climate Change (IPCC) presented a special report on the impact of land use, land use change and forests (LULUCF), which focuses on the complex issue of linking climate change with forestation, at a meeting of subsidiary bodies of the un Frame Convention on Climate Convention in Bonn, held from June 12-16. The findings of the report is likely to affect the negotiations at the crucial conference of parties (COP), scheduled to be held at The Hague in November, since it is related to the emission reduction commitments of industrialised countries under the Kyoto Protocol.

Though the atmosphere of the Bonn meeting was quite relaxed, since such precursive meetings rarely arrive at solutions for the more contentious issues, one of the most disputed loopholes of the Kyoto Protocol is that it provides for land, forest or oceans to be considered as 'sinks' for greenhouse gases.

The IPCC was initially asked to prepare this report in order to assist countries formulate rules and policies governing LULUCF activities in the implementation of the Kyoto Protocol. The report on sinks was presented in a four-hour side event that attracted basically every negotiator. Text from the report, which stated that the use of sinks could cover the entire reduction commitments in the Kyoto Protocol, had to be deleted in the last minute due to pressure by Australia, Canada, New Zealand, Russia and the US. Although this is clearly what these governments want, they were reluctant to have the matter stated so clearly, given its contentious nature.

With the release of the IPCC report, sinks can now be potentially identified as the most dangerous loophole for the environmental integrity of the Kyoto Protocol. A quote from the report's summary may illustrate this worrying trend: There are many possible definitions of a forest...Forest definitions based on legal, administrative, or cultural considerations have limitations for carbon accounting as they may bear little relationship to the amount of carbon at a site. While industrialised countries are responsible for most of the emissions, more than 50 per cent of the world's forest areas are in developing countries. The sinks issue is, therefore, likely to develop into a wide avenue for open manipulation of emission statistics in the future. It will now depend on how creatively governments will allow themselves to account for the carbon balance from sinks.

Additionally, the use of sinks also provides an incentive for replacing natural forests with monocultures. Japan is reported to have already a list of possible tree plantation projects around the Pacific - all with fast-growing Eucalyptus trees, which have well-known negative ecological consequences. Actual reductions of emissions from fossil fuel combustion will now be in real danger of becoming a minor feature, while the sinks issue gains higher visibility. Apart from the umbrella group, a good part of the G-77, particularly the Latin American countries, as well as some EU members such as Finland, France and the Netherlands, are in favour of a wider interpretation of sinks.

The IPCC report has also shed more light on the controversial question of whether the clean development mechanism (CDM) could possibly include sinks-related projects. CDM is one of the mechanisms under the Kyoto Protocol which helps industrialised countries meet their emission reduction commitments, by investing in projects in developing countries that lead to reduced emissions.

While some delegates cautioned against rushing to a decision on the issue, there were others who were already predicting that the ratification of the Kyoto Protocol will depend on progress on the sinks issue at The Hague meeting. Bolivia, Chile, Colombia, Honduras, Norway and the US all supported the inclusion of sinks projects in the CDM. The EU and many developing countries opposed the inclusion of sinks in the CDM, citing the attendant uncertainties and the difficulty in ensuring permanence in sinks projects.

The US, for one, kept a rather low profile at the meeting. Perhaps the upcoming presidential election is responsible for such subdued behaviour, since the Clinton government would not want to create a fuss over an issue that would lead to more noise at home. Australia is now on its way to become the industrial nations' chief environmental hooligan trying to bluntly open as many loopholes as possible. On actions to minimise the impacts of climate change, Australia supported a protocol with a competitive emissions trading regime, and a CDM regime that included sinks.

For many environmental groups, the question whether such a Kyoto Protocol, in its current form, can still be supported, is assuming vital proportions. Ironically, in the business community all around Europe and North America, the fossil lobby increasingly is losing ground, while advocates of more pro-active climate protection policies are becoming more outspoken. While the president of The Hague COP, Dutch environment minister Jan Pronk, is clearly ready to accept any deal that could possibly be acceptable to the US Senate, the majority of the EU seems to lean more towards trying to get the Protocol into force without Washington. Many developing countries including India, meanwhile, have been facing enormous pressure from the US government to give into the GHG reduction commitments, although they do not have to do so under the Kyoto Protocol.

Going by the underlying atmosphere of resignation at the Bonn meeting, it looks as if the upcoming conference at the Hague will in no way substantially close many of the loopholes of the Kyoto Protocol.