Clinton caught between loggers and the owl

The US President is finding it difficult to strike a policy balance between protecting the endangered spotted owl and the jobs of loggers in three states. 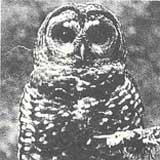 IN US President Bill Clinton's nightmares, an endangered owl species must play a starring role, for he is trapped in the dilemma of protecting it or the jobs of thousands of loggers.

The spotted owl once haunted his predecessor, George Bush, but Bush decided in favour of the timber interests and allowed logging to continue. But Clinton favours saving the last known habitat of the endangered bird, even though it means imposing measures to conserve 3.36 million ha of old-growth forests -- those standing for at least 200 years -- in Washington, Oregon and California.

At a recent conference in Oregon, Clinton put on a jaunty show of optimism about coming up with a mutually acceptable solution to the five-year controversy, fraught with legal and political dangers.

Environmentalists argue 90 per cent of old-growth forests have been destroyed already and Clinton's known penchant for evolving a consensus could result in the remainder being cut down. They are sceptical because Clinton has reversed his proposal to impose fees for mining and grazing rights on federal land and he may make a similar turnaround on the logging issue.

Tim Hermach of the Native Forest Council was critical of Clinton and said his policy was one of "boldly advancing on issues, only to turn tail and run every time he gets pressure from Congress and special interest groups".

The loggers argue that forests, even ancient ones, are renewable. Loggers, however, contend that if any resource is endlessly renewable, it is the tree, but despite this, instead of wood substituting for non-renewable ores and chemicals, its use is declining.

Another contention of the loggers is that their work helps to counter the greenhouse effect. Young trees, they explain, withdraw more carbon dioxide from the atmosphere than the mature trees that are usually cut down. And, they cap their argument by insisting forestry with a high per hectare production is good for owls because such forestry results in higher production of sustainable timber, which means larger areas can be set aside for preservation of the owls.