Closing the door on a convention

By asserting the sovereignty of the right to control their tropical forests, more than 40 developing countries are gearing up to counter the North's attempts to regulate deforestation 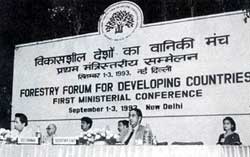 DEVELOPING countries with vast forest reserves took a major step in coordinating a joint position on international cooperation in tropical forest management at the first ministerial conference of the forestry forum for developing countries (FFDC) in New Delhi in September. Indian environment minister Kamal Nath, who chaired the conference, told Down To Earth, "We focussed exclusively on forests. The initiative has gathered an unprecedented momentum and we are in the throes of developing mechanisms to make the 'forest principles' a realistic document."

The forest principles are a non-legally binding, global consensus statement on the management, conservation and sustainable development of forests, agreed to by all countries at the Earth Summit last year. The principles were laid down to thwart the North's attempts to impose an international forest convention to regulate tropical forests.
Commented Brazilian ambassador to India Octavio Rainho Neves, "The major achievement of the conference was the setting forth of a common policy statement of the entire developing world, backed by a common political mandate, which we can now take up with the Commission on Sustainable Development (CSD), responsible for implementing Agenda 21 -- the action plan agreed to in Rio."

The Delhi Declaration, formalised by more than 40 countries, recommended that the next CSD session identify a mechanism to implement the forest principles and ensure international cooperation on transfer of funds and technology from developed to developing countries; that forests be managed according to national priorities, and that unilateral measures impeding free trade in forest products be removed (See box).

The formation of a common political forum is significant because the politics of international cooperation on tropical forests and tropical timber trade in the past decade has made developing countries increasingly insecure. At various fora, the North has pressed for stringent conservation of tropical forests to arrest climate change and conserve biodiversity, disregarding local socioeconomic realities and refusing to commit on sharing costs. In view of this, the Brazilians made it clear at Delhi that "the issue of the forests is not a matter to be dealt with in a narrow technical perspective, but with a careful political approach."

The FFDC was formed in May 1992 at India's initiative for developing countries to evolve a common strategy on forestry development. The FFDC at Delhi was its fourth session but first ministerial-level conference. It was attended by 17 ministers and representatives from more than 40 countries and observers from developed countries.

Developing country participants are happy because there is unanimity. But observers from the North were sceptical. Michel J Petit, director, agriculture, of the World Bank, observed, "It is not a realistic situation -- with the developing countries discussing the principles and those with money acting as observers."
The irreconcilable differences between the North and South on the key issues of funds and technology affected the mood of the conference. The South continued to be loud about "provision of new and additional financial resources" while the rich countries held it would be dangerous if the South made the forest principles operational only after getting money. The North said also it was important for the South to resolve its internal contradictions.

Nonetheless, most Northern observers refrained from being specific on the issue of transferring resources. On the matter of special funding to implement the forest principles, the Australian delegates pointed out, "There may be a potential to attract existing resources from other funds", but they ruled out "generation of new resources." The North insisted it will make fresh commitments only after tropical countries frame their programmes and plans of investment. "Developing countries should first specify the areas of investment and then ask for funds," said Arthur H Campeau, Canadian ambassador for environment and sustainable development.

While admitting Western aid in any form would impinge on national forestry plans of tropical countries, Northern observers insisted funding agencies would want assurances on repayments and "reasonable and acceptable priorities" in forest policy. Petit denied any contradiction between the World Bank's forestry strategy and developing countries' national priorities. But he added candidly, "When we lend money, we have to ensure reimbursement. For that, we sometimes suggest policy changes that are not always liked by governments."

Discussions at the conference echoed the controversies that have plagued the debate on tropical forestry. Malaysia's minister of primary industries Lim Keng Yaik, who headed his country's delegation, criticised singling out tropical forests as the main cause of environmental problems, excluding temperate and boreal forests from scrutiny.


According to Lim Keng Yaik, tropical timber exporting countries have proposed the scope of the International Tropical Timber Agreement (ITTA), set up in 1985, be expanded to cover temperate and boreal timber. According to FFDC, developed countries use far more timber than developing countries (See table). But Northern governments "flatly refuse to accept such a proposition," claims Lim Keng Yaik.

While the North advocates conservation of tropical forests at any cost, the South resents external policing and wants to manage its resources according to its priorities -- and not without reason. In almost all international forestry fora, tropical country governments have opposed institutional mechanisms, fearing intervention by the North in their domestic matters (See box). For instance, ITTO was established in 1983 to set up a system of consultation and cooperation between tropical timber consumers and producers, but with very little success.

Northern NGOs have campaigned and pressured ITTO to ban timber trade from unsustainably managed forests. The drastic curbs that were imposed subsequently angered countries like Malaysia because this, along with low prices of their timber, had a disastrous impact on their economies. Another major forum, TFAP, was started in 1985 to increase investments and sustainably develop forestry in tropical countries. But it got bogged down by criticism that it was arrogating powers to external agencies and foreign experts at the cost of local involvement and that it had actually stepped up commercial logging.

Tropical countries reacted against these fora because the effect of such global, top-down and legally binding solutions to deforestation was seen as fraught with danger. "This necessitated a significant political bloc in the developing world, which this conference sought to achieve," said an official observer.

Tropical countries also criticised the imposition of non-tariff barriers on international timber trade. According to Lim Keng Yaik, tropical forests are being made the "villain of the piece" and Northern governments are pushing for restrictive and punitive action against deforestation in tropical countries without seeking to tackle poverty and underdevelopment. He said the Austrian government had unilaterally imposed a discriminatory, non-tariff barrier against tropical timber by labelling all products using such timber. There are also instances of national governments issuing directives banning the use of tropical timber in public construction projects. The Indonesian delegation made it clear that "to overcome the pressing forestry problems, it would have to depend heavily on a conducive economic environment." Concurs Malaysia, "Developing countries are urged to put up with TFAP but more and more countries are denied fair market access for their forest products." FFDC, therefore, called for the removal of all impediments to international trade in tropical timber.

Taking note of these criticisms, the Delhi Declaration emphasised "open international trade in forest products and removal of unilateral and arbitrary restrictive trade regimes". It noted a supportive and open international economic and trade system would lead to economic growth and sustainable use and development of forest resources.

Northern taxation on tropical timber has to be rationalised to ensure that resources are ploughed back into conservation and excessive timber use is curbed. In 1990, European Community (EC) assistance to the tropical forestry sector amounted to less than 300 million European currency units (ECU). But a Friends of the Earth report says EC countries raised more than ECU 1.1 billion through import duty and sales tax on tropical timber.

However, the political unanimity at the conference did not reflect uniformity at all levels. "There are differences in approach within the developing world. While there is a strong lobby led by Malaysia and Indonesia, there are other heavyweights like India, which are not major timber traders," said J S Maini, Canadian assistant deputy minister of forests and environment. But Ugandan ambassador Oboth Okumu claims this difference will not impede consensus. "We have harmonised the internal differences in the approach to forest management."

However, Wen Lian Ting, Malaysia's ambassador to the UN Food and Agriculture Organisation in Rome, conceded, "The differences in approach will be apparent in individual national forestry action plans. But we are unanimous on the broader issues of transfer of funds and technology."


The participants admitted there was no breakthrough on the issues of transferring technology and funds. But they see the political recognition of forestry issues as a healthy development. "FFDC is now going to be a useful voice in the CSD. I am glad that forest ministers are getting a political profile and are asserting themselves on forestry matters."