Another public interest petition, this time in Kerala 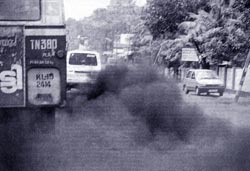 the Supreme Court's (sc) order to convert public buses in Delhi from diesel to compressed natural gas (cng) mode has had a snowballing effect throughout India. Citing Delhi as an example, civil society groups and concerned citizens are increasingly approaching their respective high courts demanding the right to clean air.

It happened first in Mumbai. Sandip Rane, a cardiologist, filed a public interest litigation petition in the high court. The petition resulted in an order for the conversion of diesel taxis and three-wheelers to cng. This was followed by Kolkata and Andhra Pradesh where state governments took the initiative.

The latest in this civil upsurge is an affidavit filed in the High Court of Kerala. It seeks measures to prevent the Kerala State Road Transport Corporation (ksrtc) from plying polluting buses. The petitioner is Sathyavan Kottarakkara from the Vidyabhyasa Suraksha Samithi, a forum for environmental awareness and safety.

The petition, admitted on September 30, pleads that the ksrtc should not ply vehicles without 'pollution under control' certificates and that all diesel buses be replaced with cng-run vehicles within a time limit. The affidavit also alleges that no pollution checks were being carried out in the 5,000-plus buses, the ksrtc plied. The charge has been denied by ksrtc. "The level of carbon dioxide emission is always kept within limits and is verified every six months,"said a counter affidavit of ksrtc.

It remains to be seen what strictures the Kerala high court will pass against the corporation. Will Kerala also go the Delhi way?